Our planet is in peril. Communities around the world are feeling the impacts of climate change manifested in a variety of ways; our atmosphere, polar caps, and oceans are warming; and our frameworks of development are unfortunately having a severe impact on species and on the environment around the world.

The SFDRR was adopted at the Third UN World Conference in Sendai, Japan, on March 18, 2015. The framework aims to achieve the substantial reduction of disaster risk and losses in lives, livelihoods and health and in the economic, physical, social, cultural and environmental assets of persons, businesses, communities and countries over the 15 years leading to 2030. More information on the Sendai Framework is available here.

The framework sets four priorities for action and seven global targets to reduce the risk of disasters and to avoid the increase in the level of existing risks. The seven targets are assessed through a set of 38 indicators. Government officials and relevant stakeholders involved in monitoring national progress have been designated to report on in the SFM, to support the assessment of global progress in the reduction of risk and losses. Country coordinators also have the option to add custom indicators and targets, which are nationally defined instruments to measure the implementation of the Sendai Priorities, to support states in reporting the relevant data they have.

Target C of the SFDRR has been incorporated to reduce direct disaster economic loss in relation to global gross domestic product (GDP) by 2030. It refers to economic losses to the agricultural sector, productive assets, housing sector, critical infrastructure, and cultural heritage.

Indicator C-2 measures the impact of disasters on agricultural production and assets. As agriculture is understood to include the crops, livestock, fisheries, agriculture, aquaculture and forest sectors as well as associated facilities and infrastructure, C-2 is the sum of five sub-indicators. Sub-indicator C-2Fo measures loss in forests damaged or destroyed by disasters.

Full reporting for the Target C indicators would require data collected from different government ministries, agencies, and/or other relevant stakeholders such as Non-governmental organisations (NGOs). It is likely that the ministry/agency responsible for national forest management would be responsible for collecting the data that states need to report on sub-indicator C-2Fo.

However, reporting country data on economic loss in forest damaged or destroyed by disasters may not be feasible, especially in developing countries which experience frequent forest fires over large areas. This was highlighted in the Sendai Framework Data Readiness Review conducted in 2017, in which 87 countries participated, which found that no single country has all the data required to report on all the targets, and that datasets on economic losses are less available than physical damage and human impact indicators. In countries where there is no methodology to assess economic loss of forests, the TGN therefore specifies that a physical damage indicator, C-2FOa, which measures the number of hectares of forests damaged/destroyed by disasters (disaggregated by hazard) will be accepted in lieu of the corresponding estimated economic loss.

1. Go to GWIS using the following URL: https://gwis.jrc.ec.europa.eu, and select the option Country Profiles under the Apps drop-down menu in the main navigation panel (see figure 1).

3. After selecting the desired country, the landing page of the desired country appears presenting general data on the country. Click on the "Country charts" menu on the left margin to proceed (see figure 3). It may be that initially, this option appears with a dark grey color font. Nevertheless, it is selectable when clicked and will turn to white color font.

4. A new window will pop up presenting two tables of data. Click on the "Go to the charts" button at the bottom of the left table (see figure 4).

6. Open the excel file that was downloaded. The file name will start with ‘MCD64.006’, referring to the MODIS Collection 6 burned area product MCD64 A1 from which burnt area statistics are computed.  MODIS (or Moderate Resolution Imaging Spectroradiometer) is a key instrument aboard the Terra and Aqua satellites. These two satellites are viewing the entire Earth's surface every 1 to 2 days, acquiring data in 36 spectral bands, or groups of wavelengths. The data presented in GWIS employs a combination of daily 500m MODIS surface reflectance and 1km MODIS active fire observations, and applies dynamic thresholds to composite Terra and Aqua imagery generated from a burn-sensitive vegetation index from MODIS 1240 and 2130 nanometer bands and a measure of temporal variability (GWIS, 2021). The algorithms’ coupled use of active-fire and reflectance data enables it to adapt regionally and over varied ecosystems, and performs substantially better in reducing the number of unclassified grid cells due to  cloud contaminated observations compared to the heritage Collection 5.1 MODIS products (Giglio et al, 2018).

Note that the data being opened from a csv file will appear in one single column in Excel at first (see figure 6). Select the "Data" menu at the top, then select all data in column A, and use the ‘Text to data‘ function and follow the Convert Text to Columns Wizard‘s instructions.

A new pop-up window will appear with options for this transformation. Make sure to use the right delimiter, which is comma in this case and click finish (see figure 7).

After the transformation from csv data has been completed, the values corresponding to the total burnt area in hectares of forest for years 2015 onwards can be reported as physical damage indicators under sub-indicator C-2Fo. In the SFM, select data entry option ‘Enter hectares manually & monetary value to be calculated’, and the system will calculate an estimate of corresponding economic loss. To include grasslands in C-2Fo reporting, add the yearly values for burned grass/shrubland to those for forests (see figure 8).

7. Member states are encouraged to include baseline data for Target C for improved analysis of progress over time. To calculate the mean annual burned area for the period for 2005-2014 in Excel, use the AVERAGE function and select cells corresponding to yearly burned area between the years 2005 and 2014 (see figure 9).

8. To calculate percentage change in any year relative to the baseline, first create a table similar to the one that can be seen in figure 9, containing the data related to the years 2015-2019 and the value for burned forest area and the baseline that was calculated earlier. Subtract the baseline value from the number of hectares burned for any year, and divide by the baseline. Ensure the cell format is converted to ‘Percentage’ (see figure 10). 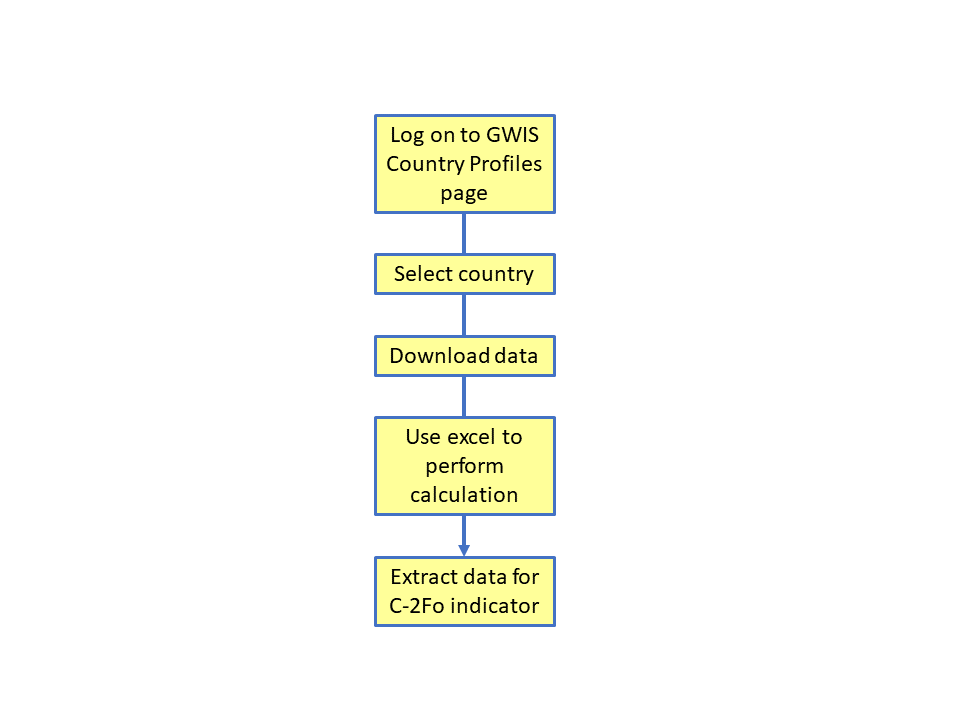 Fires continue to destroy thousands to hundreds of thousands of hectares of forests and wildlands around the world every year.  Furthermore, the United Nations Development Programme (UNDP) recognises that global warming will lead to an increase in the number and severity of forest fires in years to come. As a first step to address the challenges of wildfires, it is important to assess their geographical location and their severity.  This information can be useful to implement restrictions on land use and to identify measures to ensure the recovery of such wild areas.

The Global Wildfire Information System (GWIS) is a joint initiative of the Group on Earth Observations (GEO) and Copernicus Work Programs. GWIS aims to bring together existing information sources at the regional and national levels in order to provide a comprehensive evaluation of fire regimes and fire effects at a global scale, and support operational wildfire management from national to global levels. In 2021, GWIS launched its Country Profiles application which provides national-level statistics and historical data of fires, including yearly burned area by landcover class statistics generated from MODIS and ESA land cover products.

The historical data included in GWIS can be used to track the historical trends of forest fires in any country of the world in the last two decades.  Such data can be used to elaborate an ad-hoc indicator for the Sendai Framework Monitor that governments use to report on progress in the implementation of this framework.  The Sendai Framework includes seven targets and indicators have been designed to capture trends over the years.  One of those indicators addresses the trends in the number of hectares that have been burnt on an annual basis.

This procedure is designed to be used by those staff at government agencies in charge of compiling and entering information related to specific Sendai Framework indicators. Specifically, for those who have to enter data on indicator C-2Fo related to the impact of wildfires.

The Sendai Framework for Disaster Risk Reduction 2015-2030 (SFDRR) is the global blueprint for disaster risk reduction (DRR), which recognises that each State has the primary responsibility to prevent and reduce disaster risk, including through international, regional, subregional, transboundary and bilateral cooperation. Member states are encouraged to report on their progress towards the seven Sendai Framework global targets using the online Sendai Framework Monitor (SFM).

This Ad-hoc indicator can be applied in most countries of the world, at the national or provincial level.

Disasters triggered by natural and technological hazards continue to impact communities worldwide.  Nevertheless, communities, institutions of the civil society, academia and the private sector, government agencies, regional, and international organizations are working together to address the challenges posed by disasters through risk reduction efforts. Today, 13 October 2021, communities around the world are celebrating the International Day for Disaster Risk Reduction.

This is event is available for participation on an ongoing basis

The aim of the training course is to introduce students to the use of the RUS platform virtual machine to generate maps of the geographical extent of burned areas due to forest fires and floods with practical examples from recent events in Europe.  It will give students enrolled in a Master´s programme an opportunity to experience working with satellite images for disaster management purposes.

The Central European University (CEU) was founded in 1991 and is known for excellence in teaching and research—with purpose. At the core of its mission lies a set of principles: the pursuit of truth wherever it leads, respect for the diversity of cultures and peoples, and commitment to resolve differences through debate not denial.

Since several years ago, CEU has joined forces with UN-SPIDER to carry out training courses on the use of space technologies in disaster management to train a new generation of professionals.

On 31 August 2021, the World Meteorological Organization (WMO) launched its Atlas of Mortality and Economic Losses from Weather, Climate and Water Extremes (1970–2019).  This publication presents information on the impacts of extreme weather, climate and water-related events that took place between 1970 and 2019.  It presents historic data on impacts provoked by storms, floods, droughts, extreme temperature, landslides, wildfires, and other hazards.  Impacts are expressed in terms of fatalities and economic losses.

This is event is available for participation on an ongoing basis

For years, mapping of crop types and assessment of their characteristics has been carried out to monitor food security, inform optimal use of the landscape, and contribute to agricultural policy. High-quality crop mapping has become a requirement for most nations given its importance in national and international economics, trade, and food security, and is a major topic of interest in the domains of policy, economics, and land management.