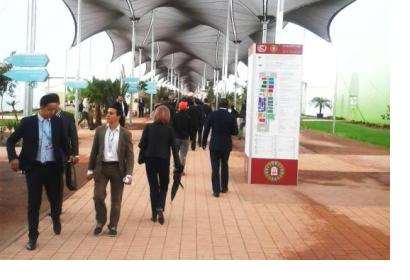 With the entry into force of the Paris climate change agreement on 04 November 2016; the Conference of Parties to the Climate Change Convention (CoP) in Marrakesh is essentially the first conference of parties dealing with its implementation.  As in previous CoPs, delegations from many Member States are meeting to agree on the ways in which the Paris agreement will be implemented.

UNOOSA is participating in various events including the special meeting of Heads of Space Agencies, to be attended by the Director of the Office, the 45th SBSTA session, the Earth Information Day organized by UNFCCC under SBSTA, and the session of the Nairobi Work Programme (NWP).  The opportunity has been used to make delegations attending the SBSTA session aware of the UNISPACE+50 process launched by the Committee on the Peaceful Uses of Outer Space and UNOOSA since last year, that is aimed to shape the Space 2030 agenda.  UNOOSA made delegations and observers aware of its efforts to promote the use of space applications in efforts related to adaptation and loss and damage, which are included in the Paris agreement.