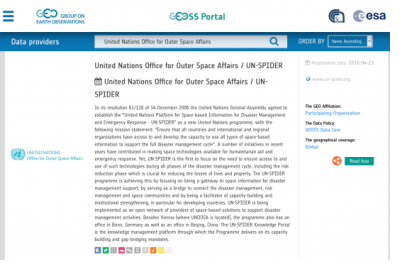 The United Nations Office for Outer Space Affairs (UNOOSA), through its UN-SPIDER programme, has become a data provider in the Group on Earth Observations System of Systems (GEOSS) Portal. Under the arrangement, selected resources from the UN-SPIDER Knowledge Portal, such as data sources, are made available through the GEOSS platform. UNOOSA participated in the 3rd GEO Data Providers Workshop in Frascati, Italy, from 2 to 4 May to present the results of this integration, exchange with other data providers and explore bringing data relevant for disaster management efforts from the GEOSS Portal into the UN-SPIDER Knowledge Portal.
The GEOSS Portal aims to serve as a single access point for users interested in Earth observation data, satellite imagery and analytical software. It facilitates the sharing of and access to environmental data and information. By bringing together existing databases and providing the ability to overlay their contents, the GEOSS Portal fosters a users ability to monitor the state of the Earth effectively.
In line with the platform's role of a data broker, the information architecture of the GEOSS Portal is designed in such a way that it connects users back to the original source. This allows for users to further investigate the resource and address queries to the data providers if needed.
The GEOSS Portal is implemented and operated by the European Space Agency (ESA). The system is powered by the GEO Data Discovery and Access Broker (DAB), a brokering framework connecting hundreds of supply systems to connect GEOSS users to GEOSS providers. GEO DAB is implemented and operated by the National Research Council (CNR) of Italy. The Group on Earth Observations (GEO) is an intergovernmental organization working to improve the availability, access and use of Earth observations and oversees the development of the GEOSS Portal.
Mandated by the United Nations General Assembly to be a gateway to space-based information supporting the entire disaster management cycle, UN-SPIDER has maintained a database of data sources from organizations worldwide on its Knowledge Portal since the creation of the latter. The sources are curated and assessed by remote sensing experts to ensure their relevance to disaster management professionals. They are categorized according to a number of criteria, such as the phase of the disaster management cycle they are relevant for, in order to support users in finding resources relevant to them.
UNOOSA become a Participating Organization to GEO in 2014 and has supported its capacity-building and awareness-raising efforts over the years.
GEOSS Portal
Tue, 05/08/2018 - 17:51
Global