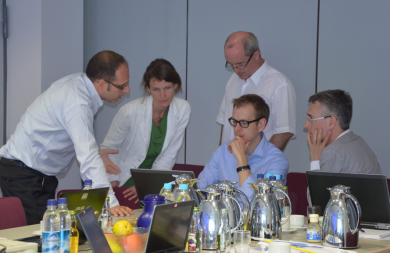 UN-SPIDER, together with representatives of the German Aerospace Center (DLR), the European Commission (EC), SERTIT, ITHACA and the US Geological Survey (USGS), participated in a meeting of the International Working Group on Satellite-based Emergency Mapping (IWG-SEM) in Oberpfaffenhofen, Germany. The meeting took place from 20 to 21 May 2014 under the chairmanship of ITHACA. On the last day of the event, the chairmanship was handed over to DLR according to IWG-SEM's rotating principle.

In their biannual meeting, the group discusses international harmonization and improvement of cooperation efforts in the domain of emergency mapping, mainly during major, wide area disaster events of global concern. Currently, the group is working on the elaboration and refinement of basic Emergency Mapping guidelines.

The IWG-SEM is the voluntary group of organizations involved in satellite based emergency mapping. It was founded in April 2012 based on the suggestions from an initial meeting organized by DLR in Hohenkamer in September 2011.