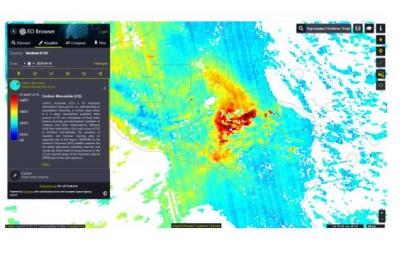 On 22 July 2020, UN-SPIDER and the Central American Coordination Centre for Natural Disaster Prevention (CEPREDENAC) joined forces to conduct a webinar on the use of novel space-based products and services to monitor forest fires that took place during the spring of 2020 in Honduras. The webinar included high ranking authorities and participants from several institutions of Honduras such as the Ministry of Environment (MiAmbiente), the National Forestry Conservation Institute (ICF), the Permanent Contingencies Commission (COPECO), the National Fire Brigade and the Humanitarian Rescue Unit (UHR), alongside participants from CEPREDENAC and UN-SPIDER.

Alexander Ariza, an expert on the use of Earth observation to monitor forest fires, and currently a Visiting Scientist with UN-SPIDER, made a presentation on novel products and services developed by the space community that can be used to track forest fires and associated smoke plums, and to assess the burn severity of forest fires. He made reference to dedicated cloud-based products and services that have been developed by the space community, including EUMETSAT and the Copernicus programme of the European Commission.

Mr. Ariza made participants aware of several satellites that are used to monitor forest fires and their smoke plums: METOP A, METOP B and METOP C of the EUMETSAT constellation that carry specific Earth observation instruments such as GOME-2 and IASI; the Sentinel 5P satellite that carries the TROPOMI instrument on board; the SAMPO satellite of the Finish Meteorological Institute and Landsat 8 currently operated by the United States Geological Survey (USGS).  He also presented the results of the use of the UN-SPIDER Recommended Practice to map the burn severity of forest fires and of the use of Google Earth Engine and other applications such as Jupyter Notebooks.

In the specific case of Honduras, Mr. Ariza displayed maps of areas affected by forest fires and maps of burn severity of those areas. He commented that during the spring of 2020, nearly 2.5 million tons of carbon were emitted. He also pointed out that such a large amount of emissions had only been assessed in 2003. He also presented a video on the dispersion of plums of the forest fires to the atmosphere north and north west of Honduras due to the prevailing winds of the season, reaching northern Guatemala, Belize and Yucacan in Mexico.

During the discussion session, the Vice Minister in charge of the Honduran Forestry Conservation Institute (ICF) explained that ICF already makes use of satellite imagery and products. Recently, with the aid of the Food and Agriculture Organization of the United Nations (FAO), experts from ICF used Google Earth Engine to update the forestry map of Honduras. The Vice Minister also commented on several innovative approaches implemented by ICF to minimize the manifestation of forest fires including:

At the end of the webinar, participating Honduran institutions, CEPREDENAC and UN-SPIDER agreed to continue with additional webinars to identify opportunities for cooperation.