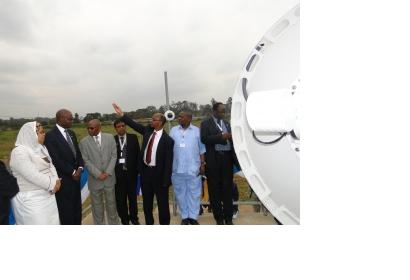 RCMRD, the Regional Centre for Mapping of Resources for Development, and host of UN-SPIDER's Regional Support Office in Kenya, recently installed and launched a new satellite receiving station. The station is capable of receiving data from Moderate Resolution Imaging Spectro-radiometer (MODIS) sensor on the US American Aqua and Terra satellites, as well as other Earth Observation satellites.

With their Earth Observing System-Front End Server, RCMRD manages all the automation and management tools needed to control the ground station antenna enabling RCMRD to track and monitor real-time status, and to ingest and demodulate multiple Earth Observation satellites. The Director for Remote Sensing Dr. Tesfaye Korme said: "We have started receiving data from MODIS Aqua and Terra, NPP, METOP, Fengyoung3, NOAA18 and 19. The ground coverage is so huge that 75 per cent of Africa is covered by our receiving station alone.” To give an idea about its ground coverage, Dr. Tesfaye Korme indicated that to the West, the antenna reaches up to Nigeria (Atlantic Coast), to the East it reaches up to Yemen, Seychelles and Mauritius (Indian Ocean), to the North up to Egypt and to the South up to Johannesburg, South Africa.

RCMRD had installed the satellite data receiving station with funding support of the Google Foundation in response to several requests from its member States in the area of crop monitoring, pasture and water condition mapping using various satellites sensors. Similar requests were also made in regard to disaster early warning and rapid mapping. The MODIS sensor aboard Terra and Aqua satellites views the entire Earth's surface every one to two days, acquiring data in 36 spectral bands, or groups of wavelengths necessary to improve the understanding of global dynamics and processes occurring on the land, in the oceans, and in the lower atmosphere.