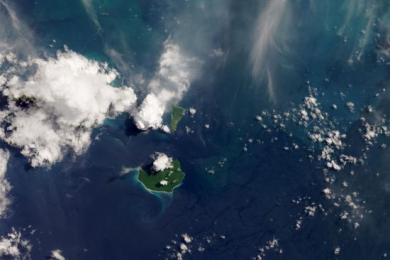 Most of the volcanic activities are rapidly evolving phenomena, and thus, hard for volcanologists and disaster management agencies to monitor and predict. In the last four decades, however, due to the proliferation of new and innovative instruments and techniques, scientists have made progress in forecasting the timing of many volcanic eruptions. New studies have shown that combining ground-based information, satellite data, and AI technologies facilitates consistent and long-term monitoring of volcanoes, allowing researchers to have a comprehensive overview of volcanic systems. Understanding volcanic behavior can help to track unrest-warning signs, to forecast volcano eruptions and possible related landslides and tsunamis, and consequently to activate emergency plans in a timely manner.

Volcanologists are now using new tools and techniques, such as space-borne and AI technologies, to track volcanic activities. Satellites can offer better prospects for cost-effective, safe, and consistent monitoring, in comparison to traditional methods. Ground-based technologies come with high financial and maintenance costs, resulting in more infrequent use. Satellites, on the other hand, provide real-time data and are a safer way to collect information as scientists do not need to get near craters and vents to collect data. Such remote-monitoring techniques can detect subtle movements of mountains, ground deformation, gas emissions, hydrothermal activity, and temperature increase. Because of the flood of data collected from ground-based and space-borne instruments, researchers are also using machine-learning techniques, a form of artificial intelligence in which computer algorithms, such as neural networks, can be trained to identify patterns in data.

Scientists started to extensively study volcanic dynamics 40 years ago, when an eruption of Mount St Helens in Washington state, United States of America, killed 57 people. Researchers tracked the volcano’s behavior before and after the eruption: they monitored gases fuming from its crater, steam explosions burst through the ice on top of the volcano, and tremors from magma moving beneath the surface. It was the first significant eruption that was captured by modern-day scientific instrumentation. Today, thanks to innovative technology, seismic networks are monitoring dozens of some of the most dangerous volcanoes around the world.

In 2005, Italian researchers developed the Multi-GAS, a multi-component gas analyzer system usually mounted on a drone that flies over active craters to measure the levels of five key gases emitted by volcanoes. This data is then sent, in real-time, to computers and analyzed. This new way of collecting gas samples is an efficient and less dangerous method compared to ground-based technologies, as the Multi-GAS instrument is able to measure volcanic-gas composition every second and does not require scientists to go near crater and vents. The Multi-GAS instrument was first tested on Stromboli, a volcano off the north coast of Sicily. In February 2007, the volcano erupted. Researchers studying the volcano saw that carbon dioxide levels rose tenfold over the two weeks before the eruption. The findings of the study allowed volcanologists to build a conceptual model of this complex volcano and determined that the chances of an explosive eruption increase when carbon dioxide emissions top 2,000 tonnes per day. In August 2019, Stromboli oozed lava again, and scientists were able to record a progressive increase in carbon dioxide in the two weeks prior, allowing them to alert the local authorities in a timely manner.

In 2008, a group of Italian researchers monitoring Mount Etna on the Sicilian mainland developed a system able to track low-frequency sound waves (infrasound waves). The system was installed on Etna in 2008 and analyzed 59 eruptions in the following 8 years. It successfully predicted 57 of the events, and sent messages to the researchers about an hour before each eruption. Given this success, in 2015 the team programmed the system to send automatic e-mail and text-message alerts to the civil-protection department in Rome and to the city of Catania close to the volcano.

Volcanologists have made a lot of progress in forecasting the timing of many volcano eruptions since 2014 with the launch of the European Space Agency’s Sentinel 1A and 1B radar satellites. Using the technique of interferometric synthetic-aperture radar, scientists can now track movements of volcanoes at unprecedented resolution levels and at frequent time intervals.

A visiting scientist collaborating with UN-SPIDER conducted studies to identify ground deformation of volcanic cones in the months prior to the eruption of the Anak Krakatoa volcano, the Nevados de Chillan volcano, and Taal volcano. The analyses used data from the Sentinel-1 satellite and were carried out using the Short Baseline Subset (SBAS) technique and, for the Taal volcano study, also differential SAR interferometry (DinSAR). The findings show evidence of growth or inflation in the volcanoes during the six months before the eruption.

Using satellite technologies, a group of German volcanologists has conducted a study to identify changes in the Anak Krakatau volcano before its eruption in 2018. The study used data from satellite radar observations to detect small changes in vertical and horizontal motion and data from the moderate-resolution imaging spectroradiometer (MODIS) on a NASA satellite to reveal thermal emissions. This data is analyzed through the MOUNTS (Monitoring Unrest from Space) system. The MOUNTS, which currently monitors 17 volcanoes, is a volcano monitoring platform that uses data from the current suite of Sentinel satellites and ground-based earthquake information, and machine-learning techniques to identify subtle patterns within the data. The findings showed that in the months prior to its eruption, the volcano was slipping at a rate of 10 millimeters per month and had the most intense thermal activity ever recorded.

In 2019, a group of researchers conducted an extensive study on 47 of the most active volcanoes in South America to capture a multidimensional picture of what happens at volcanoes before and during eruptions. The study combined radar observations, 17 years of satellite data, and machine learning technology to record and analyze temperature, ground deformation, and sulfur dioxide emissions. The findings showed that changes in at least one of these variables, and sometimes in all three, precede an eruption, sometimes years in advance.

When studying and monitoring volcanic data, researchers have combined ground and space-based technologies with machine-learning techniques, a form of artificial intelligence that can pick out patterns in data in a time-efficient way. Volcanologists at the University of Bristol, for example, have created a neural network that has churned through 30,000 Sentinel-1 images of more than 900 volcanoes and detected about 100 images as needing more attention. Of those images, 39 showed real ground distortions, meaning that the AI system had reduced the researchers’ workload by a factor of nearly 10.