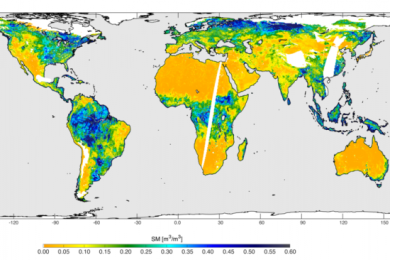 SMAP was launched on 31 January this year to orbit. Together, SMAP's two instruments, which share a common antenna, produce the highest-resolution, most accurate soil moisture maps ever obtained from space. The spacecraft’s radar transmits microwave pulses to the ground and measures the strength of the signals that bounce back from Earth, whereas its radiometer measures microwaves that are naturally emitted from Earth’s surface, explains the NASA article.

"SMAP data will eventually reveal how soil moisture conditions are changing over time in response to climate and how this impacts regional water availability,” said Dara Entekhabi, SMAP science team leader at the Massachusetts Institute of Technology in Cambridge. “SMAP data will be combined with data from other missions like NASA's Global Precipitation Measurement, Aquarius and Gravity Recovery and Climate Experiment to reveal deeper insights into how the water cycle is evolving at global and regional scales."