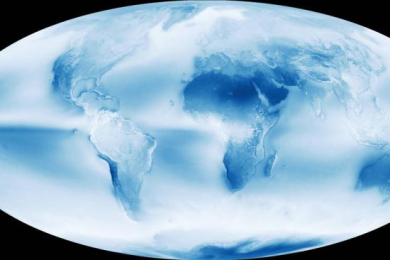 Satellite-based Earth observation as well as images taken by astronauts show that Earth views from space are dominated by clouds. A recent study by NASA has looked at a decade of imagery and estimates that about 67 percent of Earth’s surface is typically covered by clouds.

NASA writes: "Earth’s cloudy nature is unmistakable in this global cloud fraction map, based on data collected by the Moderate Resolution Imaging Spectroradiometer (MODIS) on NASA's Aqua satellite. While MODIS collects enough data to make a new global map of cloudiness every day, this version of the map shows an average of all of the satellite’s cloud observations between July 2002 and April 2015. Colors range from dark blue (no clouds) to light blue (some clouds) to white (frequent clouds)."