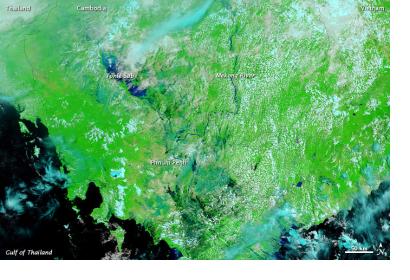 Despite cloud cover, significant changes are apparent along the Mekong River between 2010 and 2011. In 2010, the river is a thin blue line extending southward toward Phnum Penh (Phnom Penh). In 2011, flood water spans kilometers north of the city. Higher water is also apparent south of Phnum Penh, and around Tônlé Sab (Tonle Sap).

Link to the article: www.irishweatheronline.com/news/thousands-of-homes-flooded-in-cambodia/32277.html

The flooding in southern Pakistan affected 100 villages and more than 200,000 people, according to news reports. Pakistan’s prime minister declared parts of the region disaster areas and pledged thousands of tents to provide temporary shelter.

Pakistan typically receives most of its moisture between July and September. Despite some cloud cover, these images, acquired one month apart, show significant changes to the landscape. In mid-August, flood water sits on areas that had been dry a month earlier. Although conditions remain relatively dry around the city of Hyderabad, flooding is obvious around the city of Badin.

The Moderate Resolution Imaging Spectroradiometer (MODIS) on NASA’s Terra satellite captured these images on August 16, 2011 (top), and July 17, 2011 (bottom). The images show southern Pakistan, near the coast and near the border with India.
Both images use a combination of visible and infrared light to increase contrast between water and land. Water ranges in color from electric blue to navy. Vegetation is green, and bare ground is pink-beige. Clouds are pale blue-green. Just over the Indian border lies the Rann of Kachchh (or Kutch). Annual rains change this area from salt desert to salt marsh, and the increase in standing water has colored this region bright blue by mid-August.

Link to the article: www.irishweatheronline.com/news/environment/flood/pakistan-pm-declares-disaster-areas-following-monsoon-rains/32359.html