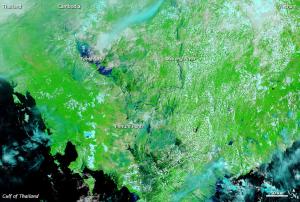 Despite cloud cover, significant changes are apparent along the Mekong River between 2010 and 2011. In 2010, the river is a thin blue line extending southward toward Phnum Penh (Phnom Penh). In 2011, flood water spans kilometers north of the city. Higher water is also apparent…