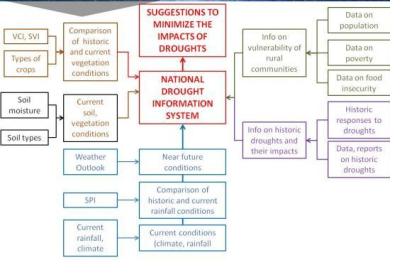 UNOOSA teamed up with FAO to host a side event, on behalf of eight additional partners, during the afternoon session of the first day of the Multi-Hazard Early Warning Conference in Cancun, Mexico. The keynote presentations addressed the topic of “Strengthening drought early warning systems” (UNOOSA) and FAO’s Agricultural Stress Index System (ASIS), followed by a panel discussion.

The devastation of droughts can be far-reaching. Regions in Africa, Asia and the American Hemisphere are facing more frequent and severe droughts, which are worsened when El Niño (ENSO) events manifest themselves. In extreme cases, such droughts lead to famine and food insecurity, forcing governments to decree national states of calamity. In recent years, FAO and other agencies have begun to make use of vegetation indexes derived from satellite imagery, such as the Normalised Difference Vegetation Index (NDVI) and the Enhance Vegetation Index (EVI). A project, established in 2015, has already begun to utilize these indices in order to strengthen national drought early warning systems through the incorporation of space-based information, in El Salvador, Guatemala, Honduras, and the Dominican Republic.

Juan-Carlos Villagran from the United Nations Office for Outer Space Affairs (UNOOSA) set the stage by presenting an overview of droughts worldwide since 1970. He pointed out that the successful management of droughts requires policy and governance, risks assessment, monitoring and early warning as well as awareness, knowledge management and education. The objective is to reduce underlying factors for drought risk and enhance mitigation measures and preparedness for droughts.

In order to attain these objectives, Drought Early Warning Systems need to be implemented as part of national drought policies. National drought information systems, that also take advantage of open data policies, are key to strengthening early warning efforts, while a migration from hazard monitoring to risk monitoring would further support these efforts. International and regional cooperation play a crucial role in this context. Attendants also had the opportunity to become aware of FAO’s ASIS system and its efforts to implement it at the country level.

During the panel discussion, Roger S. Pulwarty, Senior Science Advisor for Climate and Director of the National Integrated Drought Information System (NIDIS) at the National Oceanographic and Atmospheric Administration (NOAA) of the United States, presented the US experience regarding drought early warning, with a focus on inter-institutional efforts and the National Integrated Drought Information System. He also commented on the type of partnerships that NOAA and other US agencies engaged in with institutions in other countries and shared some success stories from the Horn of Africa.

The Mexican Space Agency is one of the 10 institutions that is working on strengthening drought early warning systems in Central America and the Dominican Republic. Its director, Julio Cesar Castillo, shared his views on how this project is bringing together international, regional and national institutions. He also discussed challenges that need to be addressed in the context of this project to improve its execution.

The Central American Coordination Centre for Natural Disaster Prevention (CEPREDENAC) has a long history regarding early warning efforts in Central America, and the mandate to deal with droughts. Roy Barboza, Executive Coordinator at CEPREDENAC, talked about the organization’s experience and mandate, and presented on how CEPREDENAC is contributing to the implementation of the Strengthening Early Warning Systems for Drought (SEWS-D) project.