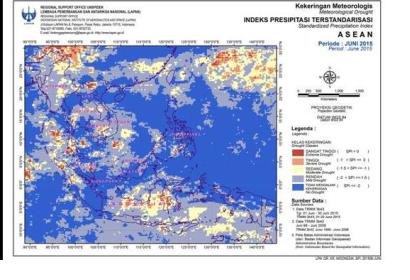 ENSO events are bringing an impact on the occurrence of drought in some of Southeast Asia regions. Indonesia National Institute of Aeronautics and Space (LAPAN), as Regional Support Office of UN-SPIDER in Southeast Asia, has been monitoring the drought condition over the regions since June 2015.

Based on SPI, some regions in Indonesia (Southern Kalimantan, Northen Sumatra, Southern Sulawesi and Nusa Tenggara) experienced drought. The same condition also occured in some parts of Thailand, Campuchea, and Vietnam (see Fig.1 -attached-). Based on VCI, VHI, and Vegetation Greenness, most of South Asia region also experienced drought (see Fig 2 to Fig 4 -attached-). Focusing on Vietnam, based on the Vegetation Greenness, most of the region experienced drought (low to very low). These conditions should be a warning for stakeholders dealing with disaster to make programs in order to anticipate the impacts of drought.