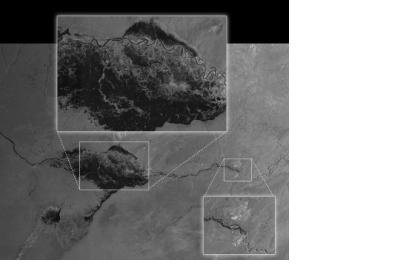 The Sentinel-1 satellite of the European Space Agency delivered its first images. As UN-SPIDER reported, the satellite was launched successfully on 3 April. The mission is the first of ESA’s Copernicus environmental monitoring programme.

Though not yet fully operational, first images are offering a glimpse into the satellites capabilities. After conclusion of the calibration phase, Sentinel-1 will start its operational phase in the next couple of months.

The Director of ESA’s Earth Observation Programmes, Volker Liebig, commented, “We are in very early days of the satellite’s life in orbit and ground segment operations, but these images certainly demonstrate the caliber of data this advanced radar mission will bring from its different imaging modes, and how it will provide essential data for Copernicus services to benefit us all.”

One of the first received images covers flooding in Namibia. The radar image shows the extent of flooding in the Caprivi plain from the Zambezi River. It was received two hours after acquisition and resulting products were available in less than an hour. One of the great advantages of the satellite's sensor is the ability to acquire such images in all weather conditions, day and night.

Other images from the first set include Brussels and Island's Thwaites Glaciers.