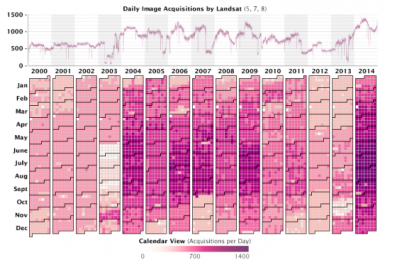 The technological improvements of the past decade have brought into scene a faster and more efficient way of working with Landsat satellite data.

Scientists and students can now spend more time analysing and evaluating instead of compiling and sorting data from satellites. The modernization of the remote sensing research process has occurred thanks to two main factors: the growth of computing power and the public and free availability of Landsat archives from 2009.

The Landsat record provides the longest continuous view of Earth’s landscape from Space, with at least one image of every location on Earth per season every year. A Landsat satellite flies over every parcel of land on Earth every sixteen days (and sometimes every eight), allowing the detection of even subtle change in the landscape between seasons and between years.

“With the full Landsat record available, we can finally look at really big problems,” said Jeff Masek, scientist of the Landsat 7 project and researcher at NASA’s Goddard Space Flight Center.