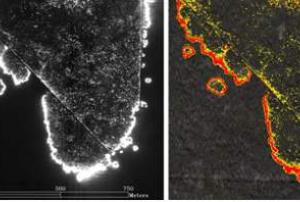 In the first test of its capabilities for forest wildfire mapping, ITRES' new Thermal Airborne Broadband Imager (TABI-1800) is being used to assist Alberta Sustainable Resource Development (SRD, Canada) with fighting active wildfires in the province's North. This new imager recently underwent field trials over SRD's Cache Percotte Grid operational test site to prove its capabilities in detecting fire hotspots and in rapid data turnaround to field-ready fire mapping products.Within a very short two-week window, this field evaluation was completed and the TABI immediately put into active operational service against two of the largest fires burning in the province.

The Cache Percotte GRID assessment site near Hinton, Alberta is used to evaluate all infrared (IR) detection technologies that could potentially assist the SRD in their provincial fire fighting efforts. Its goal is to evaluate each technology for its hotspot detection accuracy, positional precision of the… 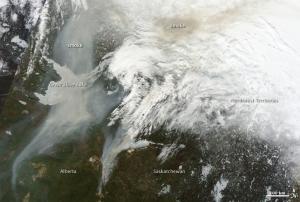 On May 16, 2011, tan and gray smoke spread hundreds of kilometers across Alberta, Saskatchewan, and the Northwest Territories in Canada. At 10:00 a.m., the Alberta government reported 116 fires burning in the province, 34 of them out of control. The following day, the total number of fires had dropped to 100, and the number of uncontrolled fires had dropped to 22. But four new fires had started to burn out of control.

The top image shows a wide area to illustrate how far the smoke traveled. The lower image provides a closer view of a massive fire burning south of Lake Athabasca. Fire detections are outlined in red. Strong winds fanned the fires on May 15 and 16, sending thick plumes of smoke to the north.

The fires forced some energy and…

WCDM is an opportunity to learn and network with professionals from as many as 40 countries. The 2016 Conference will include more than 50 presentations over 2 days, plus expanded pre and post conference programs design to help deepen learning and strengthen practical application. In addition, there will be networking opportunities and the ability to visit leading industry suppliers on the trade show floor.