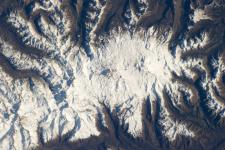 The Nevados de Chillan is one of the active volcanoes of Chile. At the suggestion of the National Emergency Office of the Ministry of Interior (ONEMI) of Chile, an analysis of the deformation of the cone was conducted during the six months just before the eruption of June 2019. The analysis was conducted using the “Short Baseline Subset (SBAS)” technique. This user story presents the methods used and the results obtained.

The Nevados del Chillan volcano is located in the Diguillin and Punilla provinces in Chile, in the following coordinates: 36° 52’ South and 71° 22’ West. The complex cone of the volcano is 1,312 meters high and according to the National Mining and Geology Service of Chile, it is considered the fourth most active volcano in the country.

The volcano is part of Andean mountains, it has 17 eruptive spots aligned in the northwest to southeast direction and can be divided in two sub-regions: Cerro Blanco to the north and Las Ternas to the south. The Last Ternas region is where the recent volcanic activity has occurred. This activity can be characterised as vulcanian and strombolian. The volcano displayed a very high activity in the year 2016. It included the growth of the dome (with high silica concentration) followed by a partial collapse; triggering pyroclastic flows that propagated along the principal ravines. There are several intermontane valleys of major dimensions within the southern region of volcano such as the Las Trancas and the Hermoso valleys. These valleys host several communities that are at risk in case of an eruption. Between 2018 and 2019 the volcano manifested an intermittent effusive- explosive activity.

A multi-temporal, radar interferometry analysis was carried out six months before the June 2019 eruption (from December 2018 to May 2019) using the technique called “Short Baseline Subset (SBAS)” (Berardino et al., 2002). This method is geared to obtain the best complex image pairs and subsequent interferograms from minimum baseline measures; allowing for a robust interferometric process. The analysis was carried out using 14 Sentinel-1 images acquired in its ascending orbit. The SRTM Digital Elevation Model (90 m resolution) was used to remove topographic features.

The use of the SBAS technique led to the identification of areas in the active cone which are experiencing an uplift and smaller areas in the foothills of the volcano where there can be negative deformations or subsidence. The results of the multi-temporal InSAR analysis are presented in figure 1. These results are overlaid on top of a Sentinel-2 optical image.

The mean ground-deformation velocity is represented with pixels ranging from blue to red colours, covering values between -35mm a +28mm. Positive values, represented with blue or light-blue coloured pixels, are located in those areas near the summit that are experiencing inflation. It is important to stress that any volcano may experience an inflation process without eruption, as well as eruption without any precursory inflation process (Chausard and Amelung, 2012). The negative values (represented with yellow- to red-coloured pixels) imply that the target moves away from the satellite and represent subsidence or deflation. These are located in distal slopes such as the Las Cabras and the Cajon Nuevo ravines to the north and the Las Trancas and Shangrila valleys to the southwest.
However, deformations could not be detected in some of the principal ravines of the volcano due to the angle of view of the satellite and the presence of dense vegetation. In general terms, the volcano manifested a minimum amount of deformation, which is expected in this type of massive volcanic complexes (Pinel et al., 2011; Pritchard et al., 2918). However, the results of these InSAR measurements justify further monitoring of the volcanic activity.

This research was conducted jointly by the Autonomous University of the State of Mexico (UAEMEX) and UN-SPIDER and benefited from the support provided by the Mexican Council of Science and Technology (CONACYT).