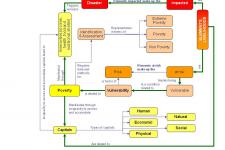 Based on the hypothesis that the GEC negatively affected livelihoods, increased poverty conditions and subsequently increased vulnerability to natural disasters; an ontology was developed to link these parameters and to model how the GEC could impact them. The ontology proposes that elements such as livelihoods may be at risk when they are vulnerable and exposed to a hazard. Other elements at risk may include infrastructure, processes, services, communities, etc. A disaster is triggered by a hazard such as an earthquake, a flood, or a tsunami and is represented through the impacts which are characterized in terms of damages and losses.

As it has been stated by many experts, poverty, livelihoods and vulnerability are not the result of just one, but many intertwining factors making it thus difficult to connect them exclusively and clearly to the GEC. According to the model proposed by DFID, poverty is linked to livelihoods via the five capitals (human, economic, physical, natural, and social). Livelihoods are vulnerable to shocks and stresses. In addition, the project used the notion of vulnerability as proposed by R. Chambers, H. Bohle and others that vulnerability can be represented in terms of susceptibility or defenselessness and incapacity to cope with shocks and stresses.

The project focused on the analysis of impacts of disasters to track the effects of GEC, but the impacts related to disasters reveal the vulnerabilities which have been generated over the years or decades. Effects of the GEC on vulnerability are often blurred by other factors including the effects of the preceding International Oil and Food Crisis, previous disasters, the pre-existing conditions regarding poverty and livelihoods.

The impacts of the GEC depend on the initial conditions characterizing the communities being affected. The conditions include degrees of poverty and extreme poverty, the types of livelihood, and the ethnic composition of the population. Research conducted within this pieced together parameters that could be used to track the vulnerability of communities to the GEC, and have identified particular sets of parameters that, when measured in a systematic fashion throughout the country, would allow government agencies to track the impacts of the GEC in a more precise fashion. The ontology put forward the notion that external factors such as the GEC can affect both vulnerability and the capitals that are related to livelihoods, as well as internal factors such as unexpected loss of income. In this way, the effects of the GEC could be linked to poverty, livelihoods, vulnerability and disasters through a logical set of relationships.