Case study Guatemala: The impact of the GEC 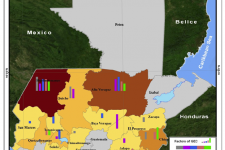 Guatemala is a country that blends itself very well to the goals of the RIVAF project as it is a vulnerable country, half of its population is below the poverty line, and is impacted by disasters frequently. In addition, the GEC had effects at the national level impacting the budget of the government via reductions in tax revenues, and affecting budgets of families in urban and rural areas through decreases in remittances. Large disasters taking place within the last decade have impacted both urban and rural communities as well as public infrastructure (roads, public buildings) which demonstrate the vulnerability of such communities and infrastructure to disasters such as floods.

The 2008 GEC led to reductions in remittances, tax revenues and other sources of income related to tourism and other sectors of development due to the deceleration of the economy and the decrease in exports of non-traditional products. Thus the GEC had an effect on the national as well as on the local level.

According to the Presidential Secretariat for Planning and Programming of Guatemala (SEGEPLAN), nearly 30 percent of the tax revenues stemmed from the VAT on imports. Imports declined by 24 percent, and so tax revenues associated with this source of VAT dropped 13.5% with respect to the previous year, and nearly 28 percent with respect to what was contemplated in the fiscal budget for the year 2009. In addition, SEGEPLAN reported that exports to Central America and the rest of the world dropped by 23.3 percent. As a way to cope with the effects of the crisis, the Presidency of the Republic implemented a set of austerity measures, and was granted approval from Congress regarding the emission of bonds in the amount of GTQ 3,000 millions.

One major type of income that was affected by the GEC in an indirect way is the income associated with salaries and wages, particularly in the case of the population involved in coffee production, as the GEC had as a related impact a reduction in the international prices of coffee. While Guatemala’s main exports crops are sugar and coffee, at the time of the crisis, most impacts were felt on the coffee sector and not in the sugar sector.

However, it must be stated that the GEC did alleviate the impacts of the Food and Oil Crisis that began in 2006. In the context of prices of products, it can be stated that the prices of some products dropped more than others. For example the price of a gallon of diesel or a gallon of gasoline dropped substantially and with a small delay compared to the prices in the international stock exchange. Prices of corn did not really experience a sharp decline due to the GEC.

Remittances as a major factor

The effect of GEC can also be seen as a reduction in the amount of remittances starting in July 2008 and recovering their Pre-GEC values by the middle of 2010 and in 2011, but not the annual rate of increase seen between 2002 and 2007. As the GEC had an impact on the amount of remittances being sent mostly from the United States to Guatemala, the economic implications of the GEC could be felt directly by families in Guatemala who depend on this extra income for their livelihoods.

The main difficulty faced in the case of Guatemala was the lack of data that did not allow the research team to conduct a more precise assessment of the impacts of the GEC. While manifestations of the GEC were identified in developed countries and within the public sector of Guatemala, its impacts could not be readily detected through data and information generated by the government and other organizations, in particular due to the fact that the main factors affected by the GEC, such as unemployment and reduction in income at the local level in urban and rural communities associated with remittances from developed countries are not monitored on a monthly basis or a yearly basis. Poverty has been assessed only recently in 2002 and in 2006 and hence, there was no data on poverty which could be used to track the impact of the GEC. Health data was also not really accessible on a monthly basis so as to track potential indirect impacts of the GEC. Nevertheless, a variety of data regarding population, poverty, livelihoods, consumer price index and geo-spatial information have been collected to generate an overall picture regarding which departments could be more or less affected by the GEC.