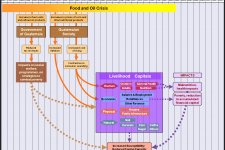 Two international crises before the Global Economic Crisis triggered effects that were detected at the national and local levels. The sharp drop in prices of coffee in the international stock market in 2000/2002 triggered a large increase in unemployment and led to tax revenue losses. The international oil and food crisis (IO&FC) in 2006-2008 impacted the prices of essential products such as corn and fuels.

An event with some relevance to the GEC in terms of a stressor that stems in the developed world is the international coffee crisis which took place in the years 2000 to 2003. The crisis manifested itself through a very large reduction in the international prices of coffee (slightly more than 50% reduction). Prices dropped sharply forcing coffee plantations to go out of business, meaning that job losses were very large. Given the fact that poverty was higher at the end of that decade than during the GEC, and taking into consideration the fact that rural families did not have an extra income derived remittances from abroad then, the impacts of this International Coffee Crisis were considerably larger, and impacted not only the poor, but also the non-poor.

In developing countries like Guatemala, where corn plays a major role in the culture and in the diet of its people and where poverty is high; and where diesel, gasoline, and other refined products from petrol are imported; it is important to take into consideration the effect of the International Oil and Food Crisis (IO&FC) which preceded the GEC in the context of livelihoods and vulnerability to shocks and stresses. Four factors characterize the impact of the food and oil crisis: increasing poverty, the depletion of the productive asset of the poor, worsening nutrition and the reduction of the utilization of education and health services.

Effects of the food and oil crisis

The effect of the rise in international prices of oil, corn and other products in the international market had severe impacts in the cost on a variety of products. Prices of food grains, which account for more than half of total calories in developing countries, increased 150 percent between January 2006 and June 2008, and about 40 percent of this increase has occurred since January 2008 alone. Within the period January 2004 to June 2008 the daily cost of the Vital Basic Food Basket (food required to achieve the minimum dietary uptake for a Guatemalan adult and other basis services such as access to potable water, electricity, clothing, housing, health, transport, recreation or education) rose by 52 percent. An increase in the cost of such a basket without an equivalent rise in income forces poor people to start sacrificing their food intake, initially replacing more expensive products of this basket by less expensive ones, but which may be less nutritive, leading to malnutrition. Additionally, inflation rose dramatically during this period, and experts were able to assess both the inflation due to external factors such as the rise in international prices of oil and food products, and internal factors.

An issue that is important to keep in mind when discussing the impact of this crisis is the fact that between 2006 and 2008, there were no major natural disasters in Guatemala, which may have led to additional poverty. In addition, remittances sent by relatives abroad had been rising in recent years. Another factor to take into consideration is the fact that export crops such as coffee and sugar cane, which are labour-intensive, did not experience drops in their international prices, and hence it could be concluded that there would not be no job losses associated with these agricultural export crops.