Case study Guatemala: The combined effect of crises and drought 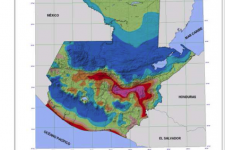 The RIVAF-project had a special focus on the impact of the GEC as detected through impacts related to disasters. One of the broad objectives of this project was to understand how the impacts of disasters of natural origin may be potential indicators of the GEC impacts. Guatemala, like other countries of the world, has experienced droughts in recent decades. The two most recent episodes were the 2001/2002 and the 2009/2010 droughts. However, unlike other countries, Guatemala had to confront the combination of a global crisis and a drought on two occasions in recent years, forcing the government to declare national states of calamity as a way to appeal for assistance to the humanitarian community.

Two regions have a high exposition to drought hazard: a narrow segment of the Pacific coastline and a geographical region located to the north of the volcanic chain and to the Sierra de las Minas mountain range, and to the west of the Merendon mountain ranges.This second region has been called the “corredor seco” or dry corridor and includes areas of the Quiche, Baja Verapaz, Chiquimula, Zacapa, El Progreso, Jutiapa and Jalapa departments.

The Coffee Crisis and the 2001 drought

The vulnerability associated with the dependency of the economy on the export crops, including the economy at the community level, was demonstrated quite dramatically in the years 2000-2003, when the prices of coffee in the international stock markets fell by more than 50 percent due to the emergence of Viet Nam as a powerful coffee producer. In Guatemala the impacts of this coffee crisis were severe, with considerable losses in terms of jobs (between 77,000 and more than 300,000 people lost their jobs depending on the source of the information). In a similar fashion, the reduction in coffee exports meant reductions in tax revenues for the government, which forced the government to introduce austerity measures.

The 2001/2002 drought came after the coffee crisis and increased the levels of malnutrition within the country, particularly in the dry corridor, and more severely those where families depended on temporary income from labour in coffee plantations. In the dry corridor the majority of people depend on the purchase of food for subsistence. The extreme poor purchase between 70 percent and 75 percent of basic grains for subsistence, while the poor purchase roughly 50 percent of basic grains. Given the high dependency of people in this area on agriculture, drought is a major concern. Compounding the reduction in income related to jobs coffee plantations is the fact that soils in the dry corridor are poor when it comes to agriculture. The drought, of course was a strong blow to those who tried to cope with the coffee crisis through subsistence crops such as corn, which are very vulnerable to drought. As a result, the United Nations launched a flash appeal and the international community supported efforts in the most affected areas, including through foor-for-work programmes.

The 2009/10 drought impacted the dry corridor region as it did nearly a decade before. In some areas losses rose up to 80 percent of the total crops and in severe cases losses were of such high degree that farmers were not able to recuperate even seeds for the next crops. According to an FAO/WFP report, roughly 400,000 families were affected by the drought and 145,400 families would require humanitarian assistance from the government and the international community given their food insecurity condition.

In terms of livelihoods, it could be stated that the drought had a severe impact on the natural capital that rural households make use of for their sustainability (soil for agriculture and on crops), particularly in the dry corridor. As a consequence of the loss of crops, an increase in the price of food, and reductions in remittances, it is to be expected that the economic and human capitals of rural livelihoods would have been affected in households in some areas of the Dry Corridor. Deficiencies in coping capacities, which complement the notion of vulnerability, have been tracked through the need for families to request assistance from the government to cope with the combined impacts of the crises and the drought. As it is to be expected, it is the extremely poor and the poor to a lesser degree that face the largest difficulties when coping with the impacts of these stresses.

As a way for communities to cope with this drought and its impacts, efforts were conducted on behalf of the government with the support of the international community. The Government of Guatemala initiated actions through the allocation of national funds to help those people which were affected by the drought and subsequent food insecurity conditions and elevated requests for international assistance. By the spring of 2010, the Government of Guatemala had already invested already US$ 17.5 million. As a way to provide assistance to families at risk of famine due to the drought taking into consideration unforeseen and substantial reductions in tax revenues, the government reduced budgets in different areas and introduced strong austerity measures.