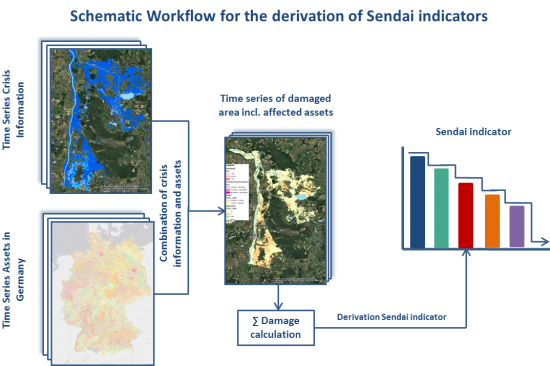 To meet the global challenges, the United Nations adopted several framework agreements, including the Sendai Framework for Disaster Risk Reduction at the Third United Nations World Conference on Disaster Risk Reduction (2015-2030). The framework builds the international reference point for disaster preparedness and focuses on reducing existing and future disaster risks as well as enhancing disaster resilience. In the Sendai framework, seven global targets have been agreed to measure global progress in implementing the framework through quantifiable indicators and to present, compare and evaluate the status and progress uniformly worldwide. The recording of the status and degree of target achievement using the agreed indicators requires the use of various data sources, which must be consistent and comparable in time and space in order to ensure global monitoring.

The National Focal Point for the Sendai Framework and the technical coordination of the Copernicus Emergency Management Service (CEMS) in Germany are both located at the Federal Office of Civil Protection and Disaster Assistance (BBK). In order to support the national monitoring of Sendai indicators in Germany, the potentials of satellite remote sensing and especially the European Copernicus Program for the acquisition of Sendai indicators will be investigated. The development of methods to derive indicators with remote sensing will happen in close consultation with the Sendai National Focal Point, the technical CEMS coordination, as well as with the inter-ministerial working group (IMAG) that is steering the political Sendai implementation process in Germany.

For the purpose of deriving Sendai indicators from satellite remote sensing and the Copernicus program, a systematic analysis of the state of the art in science and technology will be documented and, based on this a comprehensive review of selected indicators will be carried out. Methods and procedures are to be developed and existing procedures improved and validated in order to derive indicators partly or completely with satellite remote sensing and Copernicus data. One or more demonstrators are to be implemented at the BBK in order to develop possibilities for their integration into the governmental business processes of the BBK with regard to the Sendai monitoring process.

The developed methodical solutions should enable the Sendai National Focal Point and ultimately the interministerial working group responsible for the political Sendai process in Germany to provide better and more consistent indicators. The integration of satellite remote sensing / Copernicus data in the Sendai monitoring process can compensate for existing data gaps and can eventually lead to a better understanding of disaster risk and better preparedness strategies on a national and possibly local level. The close cooperation between IMAG, Sendai national focal point and the coordination of the CEMS in Germany ensures the integration of developed methods in the official monitoring process, the political discourse and the official processes at the Federal Office of Civil Protection and Disaster Assistance.