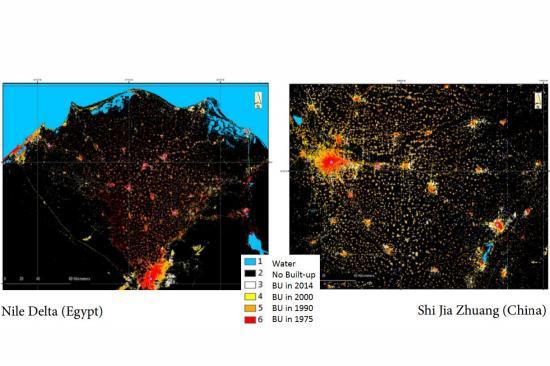 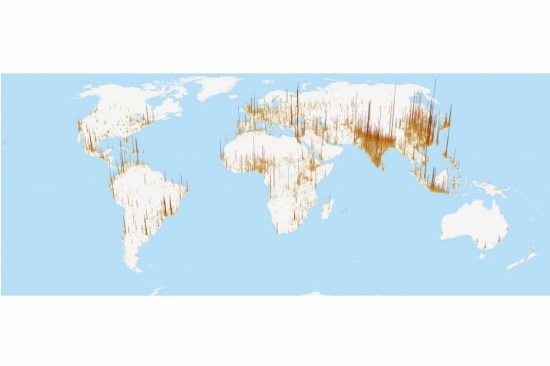 The Global Human Settlement (GHS) framework produces global open source spatial information about the human presence on the planet over time. This is in the form of built up maps, population density maps and settlement maps. This information is generated with evidence-based analytics and knowledge using new spatial data mining technologies. The framework uses heterogeneous data including global archives of fine-scale satellite imagery, census data, and volunteered geographic information. The data is processed fully automatically and generates analytics and knowledge reporting objectively and systematically about the presence of population and built-up infrastructures.

Settlement information layers for exposure mapping in time. The Global Human Settlement Layer project of the Joint Research Centre delivers free and open, global built-up and population density layers. The layers are produced from a range of open source satellite imagery archives. For example, the figure above shows built up layers for the years 1975, 1990, 2000, 2014 derived from Landsat imagery. The Global Human Settlement project is currently processing Copernicus Sentinel 1 and Sentinel 2 data. The overall aim is to process whatever open source, fine-scale data will be available in the coming years to generate information useful for deriving policy-relevant information globally.

Satellite imagery is processed using automatic procedures that provide standardized information on built-up. The procedure classifies the imagery in built-up areas and finally mosaics the built-up information products into global built-up mosaics.  The built-up mosaics are used to generating global population density layers by disaggregating the population totals available at the administrative unit into the smaller settlements units available within the built-up layers.

The results can be used for quantifying exposure at local, regional, national and global level. The built-up and population density layers are standardized information products in time and space and thus suitable for spatial comparison, between cities, or temporal comparison and growth of the cities.

The four built up and our population density layers are open source data, global and derived with the same methodology. The information can be used by users at local, regional, national and global level. The ability to analyse the growth of cities in the last 40 years and compare them is one of the most important characteristics.