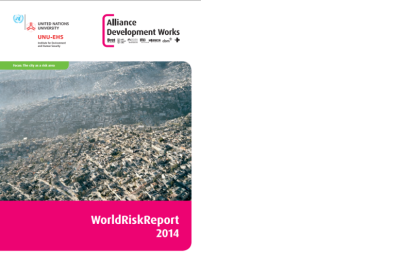 The 2014 World Risk Report (WRR 2014) recently published by the United Nations University EHS Institute and the Alliance Development Works systematically considers a country’s vulnerability, and its exposure to natural hazards to determine a ranking of countries around the world based on their disaster risk.

The 2014 issue of the report is focusing on the influence of urbanisation on societal vulnerability to natural hazards under the theme "The city as a risk area". Urbanisation is generally interpreted as a threat, because it is believed to increase people’s vulnerability. However, oftentimes urbanisation also makes it possible to better provide essential supplies to people and reduce their level of vulnerability, due to the ability to access many people in a relatively small area. Yet, fast growing cities are particularly vulnerable. The enormous growth in population in these cities leads to the development of informal settlements and slums – often in areas that are particularly exposed to natural hazards such as on river banks or steep slopes.

The WorldRiskIndex evaluates the risk of exposure to natural hazards faced by 171 countries around the world, using a combined analysis of natural hazards and social conditions. The following countries with the highest level of risk hold positions 1 to 3 in the index: Vanuatu, the Philippines and Tonga. Qatar is ranked as the country with the lowest disaster risk worldwide.