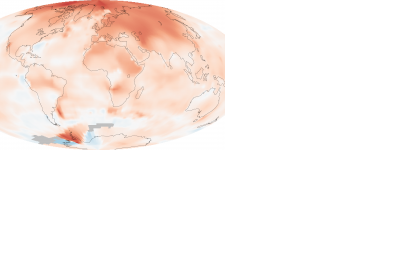 The World Meteorological Organization (WMO) in Geneva has ranked 2014 as the hottest year on record, as part of a continuing trend.

Average global air temperatures over land and sea surface in 2014 were 0.57 °C (1.03°F) above the long-term average of 14.00°C (57.2 °F) for the 1961-1990 reference period. By comparison, temperatures were 0.55 °C (1.00°F) above average in 2010 and 0.54°C (0.98°F) above average in 2005,  according to WMO calculations. Around 93% of the excess energy trapped in the atmosphere by greenhouse gases from fossil fuels and other human activities ends up in the oceans. Therefore, the heat content of the oceans is key to understanding the climate system. Global sea-surface temperatures reached record levels in 2014.

“Fourteen of the fifteen hottest years have all been this century. We expect global warming to continue, given that rising levels of greenhouse gases in the atmosphere and the increasing heat content of the oceans are committing us to a warmer future,” said Mr Michel Jarraud, WMO Secretary-General.

The final report on the Status of the Climate in 2014, with full details of regional trends and extreme events, will be available in March 2015.

See WMO's provisional statement on the Status of the Climate in 2014 at http://www.wmo.int/pages/mediacentre/press_releases/pr_1009_en.html