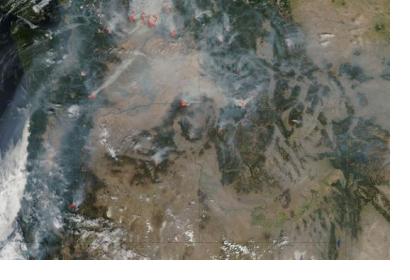 NASA’s Earth observation Aqua satellite spotted the wildfires burning throughout California, Oregon, Washington, Idaho and Montana states on August 23. One of the most important blazes was reported in the Okanogan Complex, in Washington State. It has burned 287,704 acres (116,000 hectares) and killed three firefighters. More than 1,774 fire personnel from 33 states are currently fighting it or working to support the firefighting effort.

The Aqua satellite was launched in 2002 and is part of the NASA-centered international Earth Observing System (EOS). It is a scientific research artifact in orbit around the Earth that gathers information about precipitations, the Earth’s water cycle, soil moisture, ice cover, storms and wildfires.

It features a Moderate Resolution Imaging Spectroradiometer (MODIS), capable of detecting actively burning areas, which are coloured red on the photo, thanks to its thermal bands.