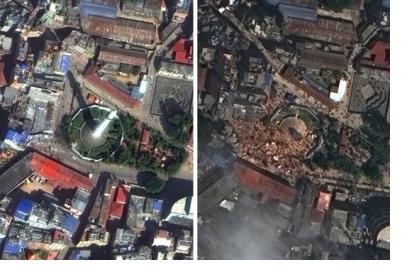 The same day a 7.8 magnitude earthquake hit Nepal, digital volunteers from all over the world began to map the affected areas. Based on data and satellite imagery the created maps help first responders, before they even hit the ground, on search, rescue and relief operations.

“The beginnings of mapping a disaster zone are messy. More data sources can be sought and added as time goes on, but from the off agencies know people on the ground will need a basic set off maps to begin their coordination efforts,” says an article on Wired.

In the beginning the focus was on completing simple based maps looking at the most affected areas. Also first hour support came from DigitalGlobe who tasked the WorldView-3 satellite, its newest model orbiting at 617km above Earth, to start capturing the region. Using these maps, the teams could identify for example open spaces likely to be used to setup camps for displaced persons.

Furthermore, the team shared pre-earthquake satellite imagery from 1 April to compare them with the latest imagery: "In early April, we did not know that an earthquake would strike Nepal on the 25th, but because our satellite constellation allows us to image nearly 60 percent of the world’s land area each month, we did have relevant pre-event imagery that was only a few weeks old."

The effort of the digital volunteers continues supporting the teams on the ground. "In the week after a large event we are data carnivores -- anything that will make our job easier is used," explain Dale Kunce, helping coordinate the American Red Cross.

According to Wired, the number of digital volunteers increased to over 2,182 trawling 14,700 km2 worth of high resolution satellite imagery and identifying 3,128 damaged buildings.