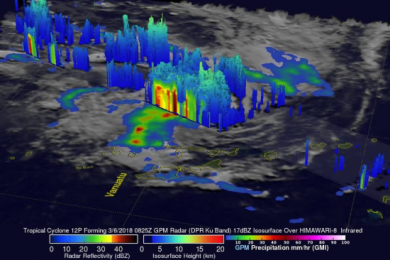 NASA’s Global Precipitation Measurement (GPM) mission core observatory satellite has been an integral asset in disaster risk management last month. This satellite is able to produce information on precipitation particles within cloud layers by using an active radar; information that is beneficial in monitoring, predicting, and tracking the progression of cyclones and other extreme weather phenomena.

Several cyclones have been tracked using this satellite during the past month, helping authorities to make better preparations in anticipation.

GPM's Dual Frequency Precipitation Radar (DPR) scanned storms in the center of the forming Cyclone Hola on 6 March as it moved towards Vanuatu, anticipating the eastern edge as having the highest levels of rainfall. The storm took 24 hours to pass over the northern half of the islands, leaving damage and crop destruction in its wake.

On 3 March, the GPM satellite monitored Cyclone Dumazile as it moved in over Madagascar and continued on towards Reunion, causing torrential rains and flooding in the region. The satellite produced information showing bands of extremely heavy rainfall in the eastern coast, falling at a rate of 6.3 inches (16 cm) per hour.

Created in conjunction with the Japanese Aerospace Exploration Agency in 2014, the GPM satellite mission was launched  to provide improved observations of rain and snow worldwide every three hours. The data provided by these advanced instruments is used create an international network of satellites to track rain and snow around the globe.