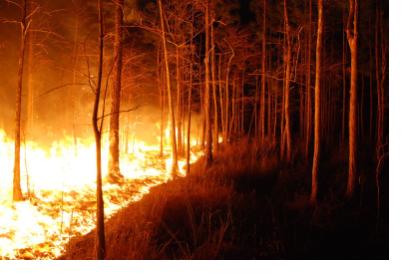 Fires continue to destroy thousands to hundreds of thousands of hectares of forests and wildlands around the world every year.  As a first step to address the challenges of wildfires, it is important to assess their geographical location and their severity. This information can be useful to implement restrictions on land use and to identify measures to ensure the recovery of such wild areas.

The Global Wildfire Information System (GWIS) is a joint initiative of the Group on Earth Observations (GEO) and Copernicus Work Programs. In 2021, GWIS launched its Country Profiles application which provides national-level statistics and historical data of fires, including yearly burned area by landcover class statistics generated from MODIS and ESA land cover products.

The historical data included in GWIS can be used to track the historical trends of forest fires in any country of the world in the last two decades. Such data can be used to elaborate an ad-hoc indicator for the Sendai Framework Monitor that governments use to report on progress in the implementation of this framework. One of those indicators addresses the trends in the number of hectares that have been burnt on an annual basis.

UN-SPIDER developed a Practical Use case, allowing users to follow a step-by-step instruction to derive these numbers from the Country Profiles application of GWIS.  The instruction suggests the establishment of a benchmark representing the annual average of hectares damaged or destroyed by forest fires.  This annual average is computed using GWIS data for the period from 2005 to 2014.  Subsequently, annual data on the amount of hectares of forest burnt is compared to this benchmark.