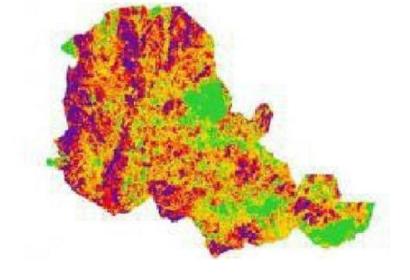 UN-SPIDER has recently developed a novel recommended practice to help contribute in the assessment of areas affected by wildfires. The innovative methodology was cultivated by members of the UN-SPIDER Bonn team, and seeks to assist in both combating and monitoring wildfire incidents by examining post-fire burn severity images.

Wildfires are uncontrollable in nature and their effects can be devastating. They possess a potential threat to human life, in addition to imposing a heavy influence on all manner of ecological processes as they partially or completely remove the vegetation layer. It is therefore essential that assessments be conducted on the severity of impacted areas. It was with this logic in mind, that the creation of the burn severity Recommended Practice was borne.

The town of Empedrado in Chile was used as the test site for trialing this practice due to the devastating wildfires that swept across the Maule region in early 2017. On January 20th 2017, a state of emergency was declared in south-central Chile, with the International Charter ‘Space and Major Disasters’ being activated merely 4 days later on January 24th 2017. The fires were ignited during a particularly dry Chilean summer, with temperatures soaring up to 38°C. The ensuing heat wave, coupled with vigorous winds, led to an unprecedented spread of flames. The forest fires eventually killed 11 people, caused approximately $333 million in damages, destroyed 1610 houses and devastated many of the plantations in the area. This event was consequently deemed by many to be among the worst forest fires the region had experienced in a number of decades.

This distinct practice takes into consideration the widespread reach of forest fires and involves evaluating vast areas of land via two primary methods: on the ground and with remote sensing tools. The methodology laid out combines the use of Landsat 8 pre- and post-fire imagery and of the Normalized Burn Ratio (NBR) index. It aims to provide burn severity data and maps that can aid in developing emergency rehabilitation and restoration plans. The burn severity can also then be used to estimate soil burn severity and the likelihood of future downstream impacts due to flooding, landslides and soil erosion.

This Recommended Practice’s greatest strength lies in its ability to be applied to any given area. Due to the fact that it was developed using both R-Studio and QGIS - both of which have identical workflows and are freely available applications - it can be implemented in a wide range of environments and users can decide for themselves with which they choose to examine the data. The Normalized Burn Ratio (NBR) that is employed during the assessment process is a relatively straightforward ratio to calculate, which further adds to the practice’s appeal.

UN-SPIDER works to ensure that all countries and international and regional organisations have the capacity to use all types of space-based information to support disaster management efforts. When using space technologies for disaster risk management and emergency response, it is not only important to have access to the right data and software, but also to be aware of practices that have proven effective in a specific context. For this reason, UN-SPIDER and its Regional Support Offices (RSOs) regularly develop Recommended Practices that provide hands-on instructions on how to use satellite information for addressing floods, droughts and other hazards. In line with UN-SPIDER’s mandates, the Recommended Practices cover various phases of the disaster management cycle. UN-SPIDER also regularly delivers training on these practices as part of its advisory support activities.

Further information and a full account of the Burn Severity Recommended Practice can be found here.