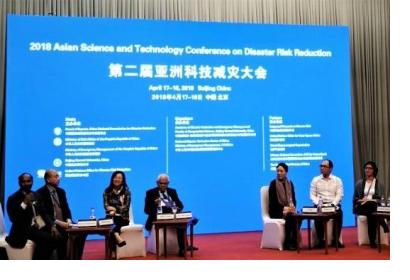 In response to the increasing importance and role of science-based decision-making in disaster risk reduction, the Asia-Pacific office of the United Nations Office for Disaster Risk Reduction (UNISDR) established the Asian Science Technology Academia Stakeholder Group (ASTAAG) in May 2015. The group brings together academic, scientific and technological communities in support of the implementation of the Sendai Framework for Disaster Risk Reduction (SFDRR).

ASTAAG convenes the Asian Science and Technology Conference for Disaster Risk Reduction on a biennial basis, the latest edition of which was held on 17-18 April 2018 in  Beijing, China, with the theme “Science-Policy Dialogue for Implementation of the Sendai Framework”.

The conference reviewed the progress on the outcome of the 1st Asian Science and Technology Conference and the commitments made by scientific, technological and academic communities through regional and global conferences, in particular in the form of the Voluntary Action Statement made at the Asian Ministerial Conference for Disaster Risk Reduction (AMCDRR) 2016 in preparation for the AMCDRR 2018 in Mongolia. It provided an opportunity to the communities in Asia to continue the much-needed science-policy dialogue to ensure that implementation of disaster risk reduction measures at all level are science and technology-based.

The United Nations Office for Outer Space Affairs (UNOOSA), through its UN-SPIDER programme, played a key role in the conference by organizing and co-chairing a session on “Progress on strengthening disaster risk governance in Asia” (Priority 2 of the Sendai Framework). The session included nine presentations from co-chairs and panelists representing various national and international organizations. It focused on three main aspects: strengthening the science-policy nexus, development of national S&T plans to support Sendai and Partnership with local communities.