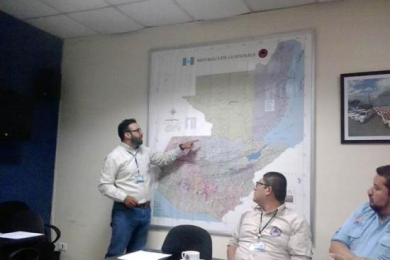 UN-SPIDER conducted an expert mission to Guatemala from 6 to 11 July 2016 as a way to continue providing technical advisory support to this country.  The mission included a meeting with the Executive Director and with staff of Guatemala’s National Coordinating Agency for Disaster Reduction (CONRED) and with representatives of various government organizations as a way to advance with the inter-institutional, technical team that was established by CONRED and other government agencies in 2012.

The opportunity was used by UN-SPIDER to brief the staff involved in this inter-institutional team on the SEWS-D project and its advances; to provide the staff of CONRED involved in the GIS department a series of updated maps on vegetation indexes including the EVI, the VCI and the SVI spanning from the summer of 2000 until the spring of 2016; and to discuss the participation of CONRED in the upcoming regional expert meeting to take place in Santo Domingo on 17 and 18 July 2016.

The mission also included a meeting with the Executive Secretary of the Central American Coordination Centre for Natural Disaster Prevention (CEPREDENAC).  The meeting was used to discuss advances in the SEWS-D project, other efforts conducted by UN-SPIDER in the region and to identify areas of cooperation, including the provision of technical advisory support to Panama regarding tsunami early warning.