UN-SPIDER and APSCO: Further cooperation in 2014 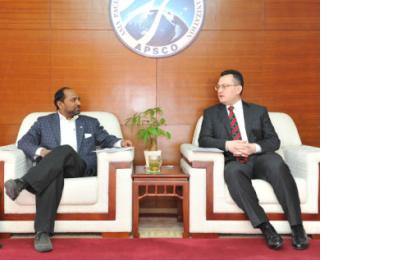 UN-SPIDER visited the office of the Asia-Pacific Space Cooperation Organization (APSCO) in Beijing, China on 13 March 2014 to discuss further joint activities in 2014.

The Asia-Pacific Space Cooperation Organization (APSCO) is an inter-governmental organisation aimed at promoting and strengthening the collaboration on space programmes and technologies among its Asian Member States. APSCO and UN-SPIDER have been cooperating closely since UN-SPIDER opened its office in Beijing in 2010.

For example, APSCO has been a collaborating partner in the last three United Nations International Conferences on Space based technologies for Disaster Management organised by the UN-SPIDER Beijing Office and the Ministry of Civil Affairs of People's Republic of China. In 2013, UN-SPIDER, APSCO and NDRCC have organised various joint training programme on specific themes.

In 2014, APSCO will support the 4th annual United Nations International Conference on Space based technologies for Disaster Management in Beijing. The organisation will also participate in several other activities planned by UN-SPIDER this year such as a capacity building programme in Beijing and a Technical Advisory Mission to Mongolia.