UN: Asia-Pacific suffering 80 percent of global losses due to disasters 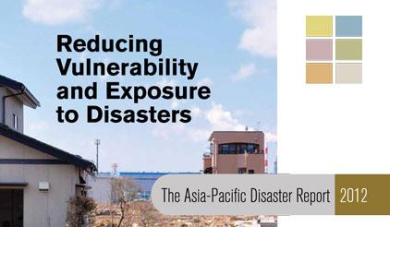 The Asia-Pacific Disaster Report (APDR) 2012 found that, from 1970 to 2010, the average number of people at risk from yearly flooding in Asia-Pacific more than doubled from 29.5 million to 63.8 million, and the number living in cyclone-prone areas has grown from 71.8 million to 120.7 million. According to the UN report, 185 million people are exposed to annual flooding and storms in a region, a figure that has mushroomed in the past four decades due to economic growth and expanding urban populations.

The region is the most severely affected by disasters, which killed almost 2 million people between 1970 and 2011. Those deaths represent 75 percent of all disaster fatalities globally. Disaster risks are increasing as more people and economic assets are put in harm's way, and the most vulnerable groups find themselves increasingly unable to cope, according to the report published by the U.N. Economic and Social Commission for Asia and the Pacific (ESCAP) and the UN Office for Disaster Risk Reduction (UNISDR).

The region experienced major disasters with devastating impacts in 2011, including Japan’s earthquake, tsunami and ensuing nuclear crisis, and the floods that hit Thailand and other parts of Southeast Asia. Economic losses hit a staggering $294 billion, with Asia-Pacific suffering 80 percent of global losses from disasters last year. The Asia-Pacific region accounts for more than 85 percent of global economic exposure to tropical cyclones, and economic exposure to floods in East and Northeast Asia has increased ten-fold in the past 40 years, the report noted.

APDR specifically mentions the importance of space applications for Disaster Risk Reduction: "Among a wide range of innovative technologies, information and communications technology (ICT) and space applications represent particular potential to advance DRR capabilities. These technologies reveal what is at risk within local areas as well as nationally or wider geographical areas such as river basins. Their many possible applications can address the exposure of physical economic, social, cultural and environmental assets. These techniques were used with considerable effect during floods in Pakistan and Thailand. The technology also demonstrates a unique ability to detect, evaluate and monitor hazards and localized risks in isolated or high risk areas, such as in mountainous terrain." The full report can be accessed on UNESCAP's website.