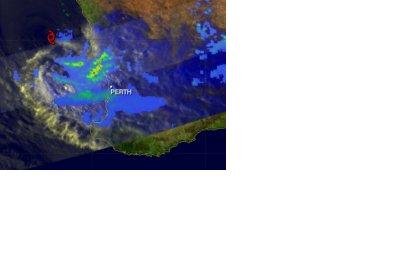 Tropical Cyclone Iggy is now a memory in southwestern Australia but it made its presence known when it made landfall on Australia's Sunset coast on February 2, 2012. NASA's TRMM satellite provided measurements of rainfall rates as it headed toward landfall and noticed heavy rain was falling in some coastal areas. Sunset Coast is the section of the coastline in Western Australia that encompasses the northern area of Perth, according to the Tourism Western Australia. Perth is the capital city of Western Australia.

On February 2, 2012 at 1044 UTC (5:44 a.m. EST) the Tropical Rainfall Measuring Mission (TRMM) satellite saw weakening Tropical Storm Iggy as it was approaching the coast of southwestern Australia. An image of rainfall rates was created at NASA's Goddard Space Flight Center in Greenbelt, Md. NASA co-manages TRMM with the Japanese Space Agency. The image was created using data from both TRMM's Microwave Imager (TMI) and Precipitation Radar (PR) instruments. The image showed that bands of heavy rainfall measuring over 50mm/hr (~2 inches) were hitting coastal areas northwest of Perth, Australia. Iggy has since dissipated as it moved eastward into interior area of Western Australia.

NASA satellites have watched as wind shear has torn Cyclone Iggy apart over the last day. NASA infrared satellite imagery showed that Iggy's strongest thunderstorms have been pushed away from the storm's center and visible imagery shows the storm is being stretched out. Iggy is weakening and heading for a landfall between Geraldton and Perth. When NASA's Aqua satellite passed over Tropical Cyclone Iggy on Feb. 1 at 1805 UTC (1:05 p.m. EST), the Atmospheric Infrared Sounder (AIRS) instrument aboard captured an infrared look at the cyclone. AIRS data showed that the strongest thunderstorms (with the coldest cloud top temperatures) had been pushed to the southeast of Iggy's center. That convection was pushed by vertical wind shear from the northwest. Once convection is pushed away from a tropical cyclone's center, the storm begins to fall apart. Tropical cyclones must be stacked in the atmosphere like a haystack. If the middle (convection in this case) gets pushed out, then the storm collapses.

The Moderate Resolution Imaging Spectroradiometer (MODIS) instrument aboard NASA's Aqua satellite captured a true color image of Iggy when it passed overhead on Feb. 2, 2012 at 0615 UTC (1:15 a.m. EST). The MODIS image clearly shows how the wind shear is affecting the tropical depression because Iggy appears elongated from northwest to southeast, which is the direction of the wind shear. The Australian Bureau of Meteorology (ABM) issued severe weather warnings for residents from Kalbarri to Morawa, and from Morawa to Wongan Hills; and Wongan to Narrogin and Harvey. The ABM website noted that the warning includes people in, near or between the following towns: Geraldton, Jurien Bay, Perth, Mandurah, York and Narrogin. Those areas can expect thunderstorms with heavy rainfall, and gusty winds as Iggy continues moving east. Flash flooding is also a possibility from the heavy rainfall.