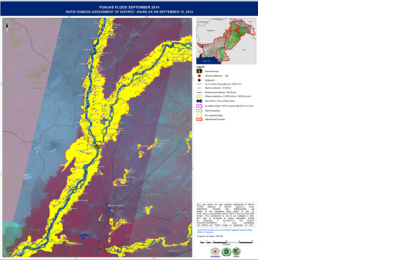 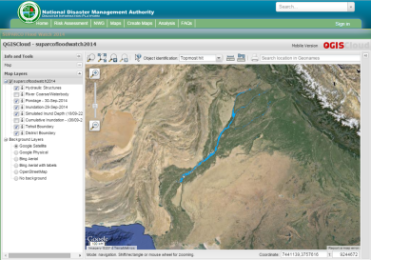 SUPARCO, which is also a UN-SPIDER Regional Support Office, closely monitored the 2014 floods, soon after the issuance of the flood alert on 4 September. SUPARCO deployed a technical expert to the Provincial Disaster Management Authority’s office in Lahore and provided pre-flood maps of flood-affected rivers along with maps showing hydrographs (discharge data) of rivers at key locations. A thematic map highlighting deaths/injuries in each affected districts and losses and damages to infrastructure were also forwarded to concerned agencies.

SUPARCO generated Rapid Maps of 29 districts showing inundation and flood extents in each district which were uploaded to the web for interactive visualization of the daily inundation extent.

Based on rapid mapping and detailed damage assessment, the following imagery derived products were provided to the National and Provincial Disaster Management Authorities.

In order to develop an effective flood monitoring framework for rapid information dissemination, a web portal (SUPARCO FloodWatch 2014) was developed and integrated into NDMA's national Disaster Information website. The flood portal was made accessible via http://disasterinfo.gov.pk/floodwatch/ link.

The overall Recovery Need Assessment (RNA) report was presented to the Government of Pakistan by the National Disaster Management Authority on 11 November 2014. In this report, in addition to the in-situ field information provided by Provincial Government Departments, satellite-based information proved very significant in estimation of losses in crops, irrigation infrastructure and other sectors in the flood affected areas.