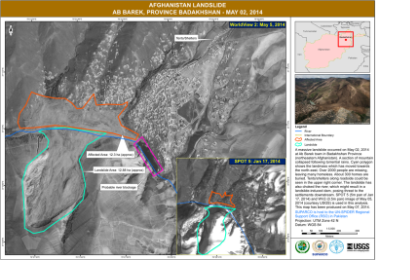 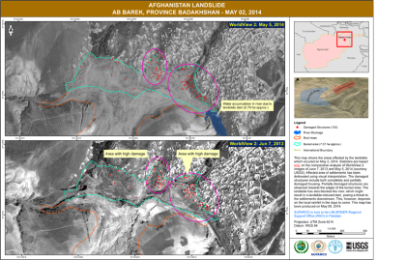 UN-SPIDER's Regional Support Office in Pakistan supported emergency response efforts following the massive landslide in Afghanistan on 2 May 2014. The experts prepared impact and damage maps for Ab Barek in the Province Badakhshan.

The maps depict an analysis based on SPOT 5 satellite imagery from 17 January 2014 received at SUPARCO's Satellite Ground Station in Islamabad and Worldview 2 imagery acquired on 2 May 2014 and provided by the US Geological Survey. The maps were prepared in collaboration with the United Nations Food and Agriculture Organization (FAO).

On 2 May 2014, torrential rainfall had caused a section of mountain to collapse burying about 300 homes with 2000 people missing. As UN-SPIDER reported previously, the International Charter: Space and Major Disasters was activated on 29 April 2014 in response to the heavy rains and flash floods in Afghanistan, which subsequently caused the landslide.