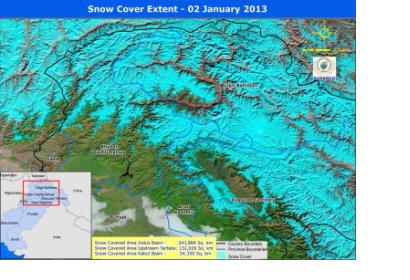 UN-SPIDER's Regional Support Office in Pakistan - the Pakistan space and upper atmosphere research commission (SUPARCO) - participated in the annual national conference on monsoon preparedness and contingency plan for the year 2013 organized by the National Disaster Management Authority (NDMA) on 26th and 27th June 2013. The focus of the conference was to provide an opportunity to Government Departments, UN agencies and various stakeholders to share their level of preparedness and respective contingency plans for the upcoming monsoon season 2013.

SUPARCO gave a presentation on the situation likely to be created due to melting of glaciers and heavy snowfall received during winters earlier. The experts explained the assessment of the snow cover and expected river run-off in the Indus Basin. This study focuses on the assessment of the snow cover dynamics on a monthly basis from 2008-2013. MODIS (On-board TERRA Satellite) imagery of 250m spatial resolution was processed for snow cover extraction. The snow cover was calculated for the whole Indus River basin which includes both eastern as well as western tributaries.

The trend in the snow covered area was calculated including monthly snow cover averages. It was emphasized by SUPARCO that the snow cover in 2013 is 17% higher as compared to previous years (2008-2012) and if the thermal conditions and temperature remains above average then there would be higher runoff contribution due to snowmelt as compared to the years 2008-2012.