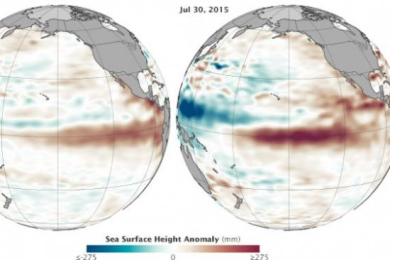 Scientists at NASA’s Jet Propulsion Laboratory have found that the ocean levels in Central and Eastern Pacific have increased between March and July 2015, which bears a resemblance to the conditions of the potent El Niño event of 1997-98. The research was carried out through altimetry measurements captured by the OSTM/Jason-2 satellite.

The scientists display a map where sea surface height is measured. Red colour indicates an increase in height due to higher temperatures compared to the average ones (thermal expansion), while blue shows a decrease in sea level because of temperatures lower than average (water contraction). White indicates normal sea level conditions.

They also compare the current situation with sea surface height in the Pacific during July 1997, which was captured by the former TOPEX/Poseidon mission. By analyzing the maps, they found out that the current situation seems even more intense than in 1997, when warming brought floods and landslides to the Western coast of the entire American continent.

However, Bill Patzert, a climatologist at NASA’s Jet Propulsion Laboratory, stated that caution needs to be kept: “it’s no sure bet that we will have a strong El Niño, but the signal is getting stronger. What happens in August through October should make or break this event.” Other factors, such as the “warm blob” in the North Pacific and the apparent shift in the Pacific Decadal Oscillation can also play a role in future developments.

Many people in the Western part of America, especially California, are longing for rains brought by El Niño, due to current drought problems, although an event as in 1997 could also become as hazardous as drought.

If you wish to see more maps about the evolution of sea surface height -including animated ones- visit NASA’s website.