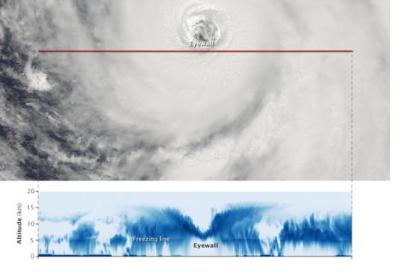 Stunning images of the Atsani typhoon have been captured by CloudSat and Aqua satellites on August 19. The first space artifact passed near its eye and collected information about the inside of the typhoon through its cloud-penetrating radar. For its part, the MODIS web on the Aqua satellite passed above Atsani capturing an image of the storm's eyewall where the the red line is the north-to-south track that CloudSat took.

CloudSat's record displays what the storm would look like if it had been sliced near the middle and viewed from the side: the darkest blues indicate regions where clouds and rain were the strongest. It also shows the event’s outward sloping eyewall, intense convection and rainfall, and cloud structure. The blue horizontal line across the data is the freezing line: ice particles were registered above it and raindrops below it.

Atsani is the most recent supertyphoon which is currently impacting the Western North Pacific and approaching Japan. It should cause heavy rains in eastern Honshu, including Tokyo. After curving East of Japan, Atsani would remain over the open ocean with no further impacts to Asia next week.

CloudSat is an Earth observation satellite operated by NASA and launched in 2006. Its mission is to measure the altitude and properties of clouds, adding to information on the relationship between clouds and climate. In nine years it has captured images of nearly 1,200 hurricane or typhoon strength tropical cyclones.