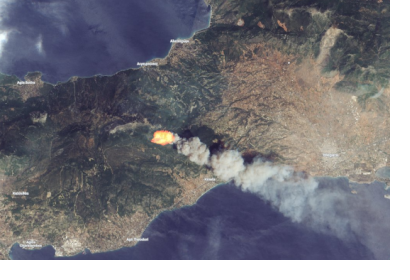 The summer of 2018 has seen several severe wildfires across Europe and the world. A number of space-based applications and data from the National Aeronautics and Space Administration (NASA), the European Union’s Copernicus programme, the European Forest Fire Information System (EFFIS) are supporting authorities in fighting the fires.

Both NASA GFWED, Copernicus’ EMS and EFFIS provide disaster management with free satellite data for accurate forecasting, monitoring, and recovery from fires. These services can be accessed at the NASA GFWED and Copernicus’ EMS, EFFIS websites.

The worst fire crisis in more than a decade has ripped through the Attica region of Greece, killing at least 80 people. Two major wildfires are raging either side of Athens, one at Rafina to the city’s east, with the other near the towns of Kineta and Mati to the west of Athens. The Greek government invoked European Union civil protection agreements to seek international help from other EU nations.

Further international cooperation and aid came through the activation of The International Charter “Space and Major Disasters” on 24 July, which faciliated access to satellite imagery for disaster management and emergency response. The Chater was activated by The General Secretariat for Civil Protection on behalf of Hellenic Space Agency and the European Space Agency acted as project management for the activation.

Sweden has also experienced over a week of record-breaking fires covering over 20,000 hectares, prompting authorities to ask for international assistance. Firefighters from Italy, Germany, Poland and France have joined the efforts to contain the fires. Hot weather and persistent drought are the main causes, and the national weather service has issued fire warnings for almost the entire country. At least 500 people have been evacuated from the fires, which have caused approximately 600m Swedish Krona ($67m; €57m) worth of damage, but fortunately no lives have been lost in the Swedish fires.

Copernicus Sentinel 2 satellite observed the devastating wildfires near Kineta on 23 July and used image band combinations to observe the fire front and hotspots. Sentinel 2 provided further imagery on the deadly wildfires near Mati when it made an overpass of the area on 24 July. The TROPOspheric Monitoring Instrument (TROPOMI), a spectrometer sensing ultraviolet, visible, near and short-wavelength infrared to monitor ozone, methane, formaldehyde, aerosol, carbon monoxide, NO2 and SO2 in the atmosphere; aboard the Copernicus Sentinel-5 has additionally tracked the NO2 plume from the wildfires.

Of the many forest fires burning across Sweden, the Swedish Civil Contingencies Agency activated the Copernicus’ EMS Rapid Mapping Component for mapping of the major fires areas. Delineation maps showing the extent of the fires are being produced over five Areas of Interest: Enskogen, Hammarstrand, Trangslet, Lillhardal and Strandasmyrvallen, and disaster managers use these maps in their emergency response efforts.

EFFIS works towards the protection of forests against fires in EU and neighbour countries, and provides information on forest fires in Europe. It aims at providing up-to-date, reliable information on forest fires at the European level, providing European level assessments during both pre-fire and post-fire phases, thus supporting fire prevention, preparedness, firefighting and post-fire evaluations.

The EFFIS aims at bringing together existing information sources at the regional and national level in order to provide a comprehensive view and evaluation of fire regimes and fire effects at the global level.

All services provided by Copernicus are free of charge and provide vital space-based information for disaster management and can be accessed through the Copernicus website.

NASA experts have recently launched a model that analyzers weather factors that lead to the formation and escalation of wildfires. The GFWED database uses local in situ meteorological information in combination with satellite to calculate the likelihood of vegetation fire starting and spreading as well as the potential ferocity of the fires. The prediction of the fires is important because smoke from fires has serious implication for air quality and the amount of greenhouse gases in the atmosphere.

The GFWED model compiles and analyzes various data sets and produces a rating for a particular area that indicates how likely and intense fire might become. This rating is the same type of rating that many firefighting and disaster management agencies use in their day–to–day operations. Historical data is also available to understand the weather conditions under which fires have occurred in the past, and near–real–time data are available to gauge current fire danger.

GFWED is accessible for free from their site.

UN-SPIDER has also developed a step-by-step procedure to support the assessment of mapping the burn severity of areas affected by wildfires. This so-called Recommended Practice can be accessed for free through the UN-SPIDER’s Knowledge Portal.

This practice was developed to enable the assessment of large areas that are affected by wildfires. These areas are usually difficult to assess on the ground, hence the use of remote sensing tools.

The burn severity data can aid in developing emergency rehabilitation and restoration plans, post-fire. It can also be used to estimate the likelihood of future impacts that can be caused by flooding, landslides, and soil erosion.

The Burn Severity Recommended Practice can be accessed through UN-SPIDER's Knowledge Portal.