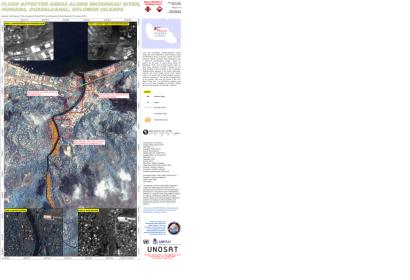 The International Charter: Space and Major Disaster was activated on 5 April by UNITAR/UNOSAT on behalf of UN ESCAP and UN OCHA in the Solomon Islands due to heavy rainfall which caused flash flooding.

Most affected is the area of the Capital, city of Honaira, where thousands of people are displaced, 19 have been killed and almost 30 are still missing. The 48 hours heavy rainfall caused the rivers around the capital to burst their banks, destroying important infrastructure points – bridges and main roads.

The tropical storm left the islands after it affected more than 12,000 people.

On the website of the International Charter: Space and Major Disasters first satellite image products, produced by UNITAR/UNOSAT based on imagery provided by Roskosmos, KARI and NASA,  have been posted and are available to the authorities and the emergency responders.

Parallel to the International Charter, the Emergency Mechanism Sentinel Asia was also activatied. The UN-SPIDER Regional Support Office - Asian Disaster Reduction Center (ADRC) - received the request made by the Applied Geoscience and Technology Division (SOPAC) of  the Secretariat of the Pacific Community (SPC). Following the activation the National Remote Sensing Centre (NRSC) at the Indian Space Research Organization provided Cartosat-1 data of 5-Apr-2014, over Solomon Islands.