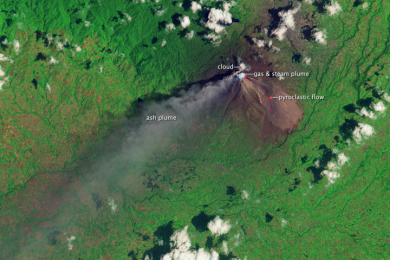 In January 2014, Mount Sinabung on Indonesia's Sumatra island has exploded intensively and repeatedly, forcing thousands of residents to vacate their houses. While eruptions have weakened and are less violent now, the volcanic activity of Mount Sinabung is ongoing.

NASA's Landsat satellite has captured the ash plume and pyroclastic flow from the volcano on 6 March 2014. The false-color image clearly shows the pyroclastic flow in red on the eastern flank of Sinabung.