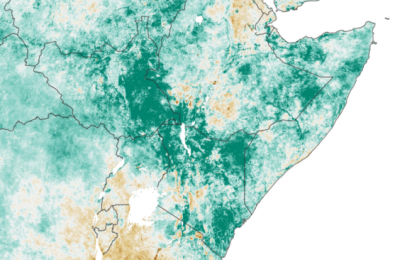 SERVIR, a joint program between NASA and the U.S. Agency for International Development (USAID), has partnered with relief organizations and the United Nations, including the Desert Locust Information System of the UN Food and Agriculture Organization (FAO), to produce maps that could explain locust behavior. The maps provide useful information on environmental conditions, such as soil moisture and vegetation, that can influence locust life cycles. By identifying the potential conditions under which the locusts hatch and grow, these maps can help governments keep track of the locust swarms, create forecasts of where and how much longer locust outbreaks might occur, as well as prevent other locust infestations from happening.

SERVIR, whose aim is to use satellite images to improve environmental policies in developing nations, has developed a map that shows the average soil moisture over eastern Africa from 14 to 20 January 2020, when the locust invasion started. The map was developed using data collected from the Cyclone Global Navigation Satellite System (CYGNSS) micro-satellites and combined it with the model-based Land Information System. CYGNESS measures data using a technique called scatterometry, which involves a radar instrument aboard a satellite that sends a signal to the ground, and measures the signal strength reflected back to it. Although CYGNSS measures primarily ocean surface winds, it has also been used to successfully measure land surface conditions, such as changes in hydrologic variables like near-surface soil moisture, flood inundation, and wetland extent.

Learning about soil moisture is useful in preventing locust infestations. Since adult locusts are hard to track because they can fly 50 to 150 kilometers in a single day, scientists need to target locust eggs and young locusts, which are less mobile and make easier targets. Locusts breed in wet, warm and sandy locations, usually when the soil is moist down to 5-10 centimeters below the surface. Pinpointing potential breeding locations is important to take early actions. Breeding spots can then be sprayed with pesticides to stop the locust population from growing out of control.

NASA researchers have also developed another map that depicts changes in green vegetation across eastern Africa between 15 December 2019 and 15 March 2020. The map uses data collected by the Moderate Resolution Imaging Spectroradiometer (MODIS) on NASA’s Terra satellite. MODIS calculates the Normalized Difference Vegetation Index (NDVI), which measures the health and greenness of vegetation and crops based on how much red and near-infrared light it reflects. Healthy vegetation with lots of chlorophyll reflects more near-infrared light and less visible light.

This map provides useful information that can explain the behavior of locusts. After locusts lay the eggs and hatch, they start looking for vegetation to feed on. They migrate, looking for more to eat, and then start multiplying. Pinpointing green vegetation near potential breeding locations is important because it will show where locusts will grow and migrate to. The map shows that the vegetation across the Horn of Africa is much greener than average years, since, between October and December 2019, eastern Africa received up to four times more rainfall than average, making it one of the wettest seasons in four decades. The situation is expected to worsen in the coming months with the long rainy season approaching.

These two maps and new satellite datasets produced by NASA will provide useful insights that will help governments keep track of the locust swarms, assess the damage already caused, create forecasts of where and how much longer locust outbreaks might occur, as well as find a strategy to prevent large-scale infestations.

Locusts are voracious insects as a single one of them can easily consume their body weight in vegetation in one day. A small swarm, which compromised 40 million locusts, can devour as much food as 35,000 people. In one day, a small swarm can jeopardize a farmer’s livelihood. Traveling locust swarms are common in Africa, southern Asia, and the Middle East. However, the insect population started growing dramatically in December 2019. Kenya, which is experiencing the worst locust even in 70 years, is the most affected country. As of January 2020, at least 70,000 hectares (173,000 acres) of cropland were compromised. In February, the swarms spread to ten countries in eastern Africa, decimating farmland and threatening food supplies for millions of people.

To read more about the current locust situation in Africa, please visit the Desert Locust Information Service of the Food and Agriculture Organization (FAO) of the United Nations. For more information about monitoring locust outbreaks with satellites, see locust monitoring.