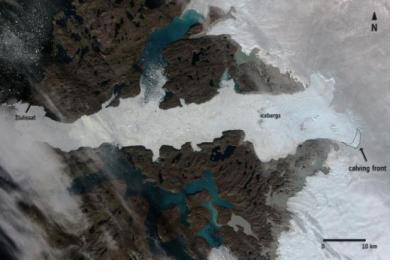 The European Space Agency’s (ESA) Sentinel-1A satellite captured the Jakobshavn glacier´s calving process, one of the biggest iceberg breaking phenomena on record. By comparing images before and after the event, scientists found that it has lost a total area of 12.5 km2, equivalent to a volume of 17.5 km3, which could cover the Island of Manhattan by a 300 m thick layer of ice.

The Jakobshavn Glacier is a vast outlet glacier located in Western Greenland and produces around 100% of Greenland’s icebergs. Each year, 35 billion tones of icebergs calve off and pass out of the fjord. However, sometimes they are so large that they cannot float away easily and remain stuck on the bottom in shallower regions until they manage to melt.

It has been tracked for over 250 years in order to get a better insight into the role of ice streams in climate change, icecap glaciology and its impact on the sea level.

The Sentinel-1A is an Earth observation satellite equipped with a C-band Synthetic Aperture Radar, launched by ESA in 2014. It is able to offer imagery despite light scarcity and cloud cover. It is used for maritime surveillance, sea-ice charting, ice-sheet tracking and environmental monitoring.