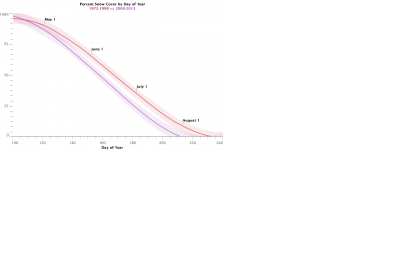 A new NASA study about snowmelt in Wyoming shows, that the snow in a basin in northwest Wyoming now disappears about 16 days earlier than it did in the period from the 1970s through the 1990s. Snowmelt, as a water source, has a significant impact on agriculture and ecosystems in Wyoming.

For the study, Dorothy Hall, lead author of the study and scientist at NASA’s Goddart Space Flight Center, and her team manually screened more than thousand pictures captured by the Landsat satellite, to create 227 snow maps for the period from 1972 to 2013. The manual work was necessary to avoid cloud caused inaccuracies. About 3000 MODIS images could be analysed automatically. Ground-based stream discharge measurements and daily temperature and precipitation records were also analysed.

“Earlier snowmelt impacts the water resources of most of the state of Wyoming, which has been undergoing a drought since 1999. Monitoring and documenting changes in the timing of snowmelt helps hydrologists plan water resource management for human use and optimize reservoir management,” Hall stated.