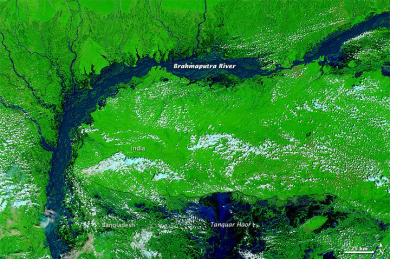 Bangladesh is one of the most flood-prone countries in the world. However, a combination of heavy monsoon rainfall and the arrival of meltwater from the Himalayas has led to exceptionally heavy floods in Bangladesh in the summer of 2014. NASA's Terra satellite has captured a scene in late August showing flooded areas along the Brahmaputra River and the Tanquar hoar wetlands.

When comparing the image with the same area one year earlier the extent of the unusally strong floods becomes evident.