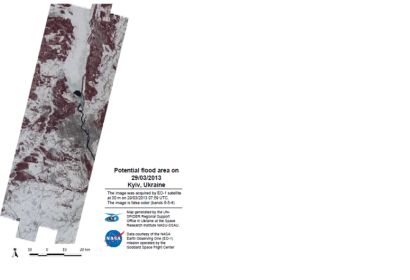 Over the period March 22-24, 2013, northern and western regions of Ukraine experienced a snowfall equal to the monthly norm. The amount of snow and rising temperatures significantly increased the risk of potential floods. The state of emergency was declared in Kiev and its neighboring regions by local authorities due to the storm and high flood risk. According to the resolution no. 58922/59/1-11 from 12 February 2013, the Cabinet of Ministers of Ukraine requires all local authorities to take all measures to be prepared for the floods.

UN-SPIDER's Regional Support Office in Ukraine made a request to NASA to acquire images from the EO-1 satellite over the Kyiv region. The image was taken on March 29, 2013 at 07:59UTC, and was made available at about 11:25UTC, thus ensuring fast access and delivery of the satellite data. The image and products were delivered to the State Space Agency of Ukraine (SSAU) and local authorities responsible for dealing with the emergency.