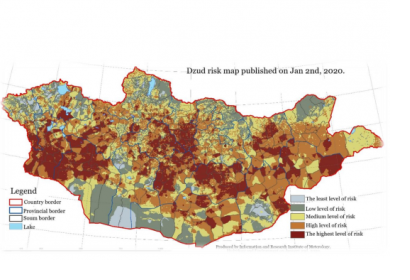 The Mongolian National Agency for Meteorology and Environmental Monitoring (NAMEM) has developed a extreme winter (dzud) risk map for the country using MODIS satellite data, among other resources. The map shows that over 50 per cent of the country are at risk of a severe winter. Following the analysis, the International Federation of the Red Cross and Red Crescent Societies (IFRC) has released funds to limit the impact on vulnerable herders. The early action move is carried out under the Disaster Relief Emergency Fund (DREF) forecast-based financing (FbF) approach, an early action protocol under which funds are released ahead of a disaster to limit its impact.

NAMEM developed the dzud risk map using 11 different parameters based on remote sensing data collected from MODIS satellite, such as snow cover and drought index, and on ground observation data, including summer condition, anomalous precipitation and temperature, snow depth, air temperature forecast and precipitation forecast. The weight of each parameter is determined through multi-criteria decision analysis and weighted layers are overlaid in a geographic information system (GIS). The map indicates that over 50 per cent of the territory is identified with severe winter risk, while 25 per cent of the area is in mid-risk. Eight provinces have over 20 per cent of very high-risk coverage in the territory.

The Mongolian dzud has severe impacts on the agricultural sector which, because of the harsh weather, remains heavily focused on nomadic animal husbandry that directly supports about a quarter of people and is the only source of income for herders. Continuous harsh conditions put at risk millions of livestock, which are the only source of food, transport and income for almost half the population of Mongolia, leaving thousands of families in hardship and forcing them to move to rural areas or outside the country.

In order to prevent this, IFRC, through the FbF programme, provides Mongolian provinces with cash assistance, livestock and nutrition kits. In particular, the Disaster Relief Emergency Fund (DREF) of IFRC has recently released CHF 210,968 (217,000 US dollars) to help 1,000 vulnerable herder families to prevent the starvation, dehydration and cold exposure of their livestock because of poor access to feed, water, veterinary care and shelter. This financial support allows the Mongolian Red Cross Society to help some of the most at-risk people before winter sets in for good and to prevent large-scale losses of herds that have significant humanitarian implications. The early action is set to be completed on 8 March 2020, within two months after the trigger date on 8 January.

The IFRC forecast-based financing programme enables access to humanitarian funding for early action. Its main goal is to anticipate disasters, prevent their impact, if possible, and reduce human suffering and losses. The key element of FbF is to agree in advance to release financial resources, if a particular forecast threshold is passed. Satellite data plays contributes to identifying so-called “danger levels” for a region; on their basis, a forecast trigger for pre-defined actions is established. The roles and responsibilities of everyone involved in implementing these actions are defined in the Early Action Protocol (EAP). The EAP ensures that, when disaster strikes, the different stakeholders involved interact in a smooth and efficient way and that the communities are prepared for disasters.