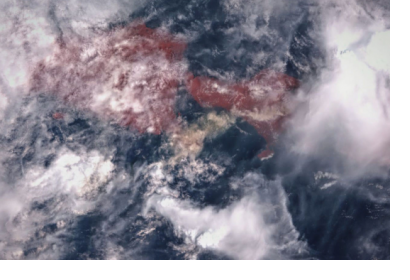 A team of scientists, led by the University of Bristol’s School of Earth Sciences, has used Sentinel-1 satellite imagery to analyze the ground deformation of the Agung volcano in Bali, Indonesia, and explain why it erupted in November 2017 after 50 years of dormancy.

The previous eruption of Agung in 1963 killed nearly 2,000 people and was followed by a small eruption of its neighbouring volcano, Batur. Because this past event was among the deadliest volcanic eruptions of the 20th century, the scientific community deployed a great effort into the monitoring and understanding of the re-awakening of Agung.

Two months before the eruption, a sudden increase in the number of small earthquakes occurred around the volcano. The researchers realized satellite images could reveal the volcanic ground deformation that occurred prior to the 2017 eruption. From satellite imagery and 3D numerical models, they were able to show that this continuous seismicity was associated with a deep, sub-vertical magma intrusion between Agung and its neighbour Batur. This, combined with observations of the 1963 eruption, suggests a vertically and laterally interconnected plumbing system experiencing recurring magma mixing.

The ongoing interactions between Agung and Batur have important implications for the interpretation of distal seismicity, the links between closely spaced arc volcanoes, and the potential for cascading hazards.

Satellite geodetic data provide a complementary approach to understanding the drivers of volcanic unrest. Images from interferometric synthetic aperture radar (InSAR) - a radar technique used in geodesy and remote sensing - are produced every 6–12 days globally by the European Sentinel-1 constellation, with even more frequent observations possible for specific targets by using multiple satellites. There is a statistically significant link between satellite-detected surface deformation and eruption.

The study shows how forecasting explosive eruptions rely on using monitoring data to interpret the patterns and timescales of magma transport and mixing. The ability to resolve these processes in space and time is key to understanding the nature and connectivity of magmatic systems and the mechanisms driving volcanic unrest.

In addition to helping scientists understand why Agung and Batur erupted simultaneously more than a half-century ago, the latest research could aid future forecasting models and help keep the people living next to Agung and Batur safe.

The study is funded by the Centre for Observation and Modelling of Earthquakes, Volcanoes and Tectonics (COMET), a research centre focusing on tectonic and volcanic processes using Earth observation techniques.